New exhibition at the Museum of Science and Industry shows how unique buildings were saved from collapse. 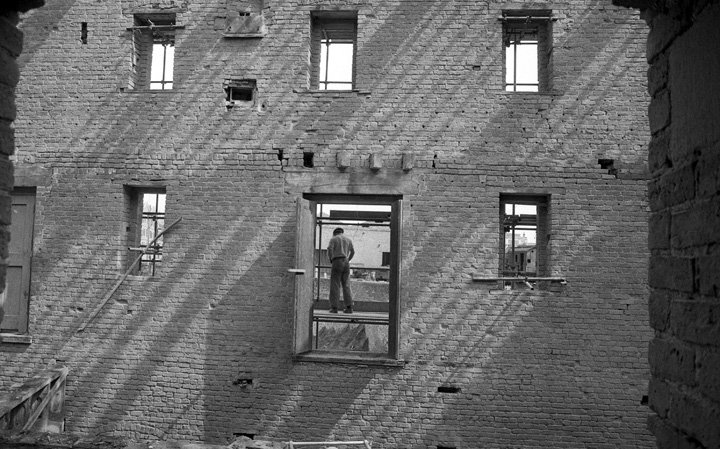 A stunning new photography exhibition at the Museum of Science and Industry charts the history of the museum and the building restoration work carried out since it moved to the site of the historic Liverpool Road Station in 1983.

Liverpool Road Station is the Manchester terminus of the record-breaking Liverpool and Manchester Railway. Built in 1830 by ambitious businessmen to link the factories of Manchester with the docks at Liverpool, the railway was an instant success. As the profits poured in, the pioneering project was copied all over the world. Soon, a vast network of iron rails covered the country triggering a transformation of technology and trade.

The exhibition, Changing Places, Creating Spaces, is housed in the Grade I listed Station Building, the oldest passenger station in the world. In its working life, it was a scene of constant activity, as up to 2,500 travellers poured through the doors every day. The railway meant that people could travel faster than ever before, at less than half the price of a stagecoach. The busy service soon outgrew this building and in 1844, the passenger trains were rerouted to the grand new Victoria station.

For over 140 years the unique buildings on the site saw non-stop activity. People and goods travelled in and out around the clock. When British Rail closed the site in 1975, the buildings were in a perilous state. The museum team has been working to conserve this extraordinary heritage site since the museum opened in 1983.

The Station Building still contains the original waiting rooms, which have been carefully conserved. Changing Places, Creating Spaces complements the museum’s existing Revolutionary Railroad and Destination Stations exhibitions in the building, where visitors can soak up the atmosphere of the Grade I listed building, find out how the railways revolutionised time and admire original artworks that charted the epic construction project of the 1830s.

Admission to the exhibition is free. Click here for more information.

ABOUT THE MUSEUM OF SCIENCE AND INDUSTRY