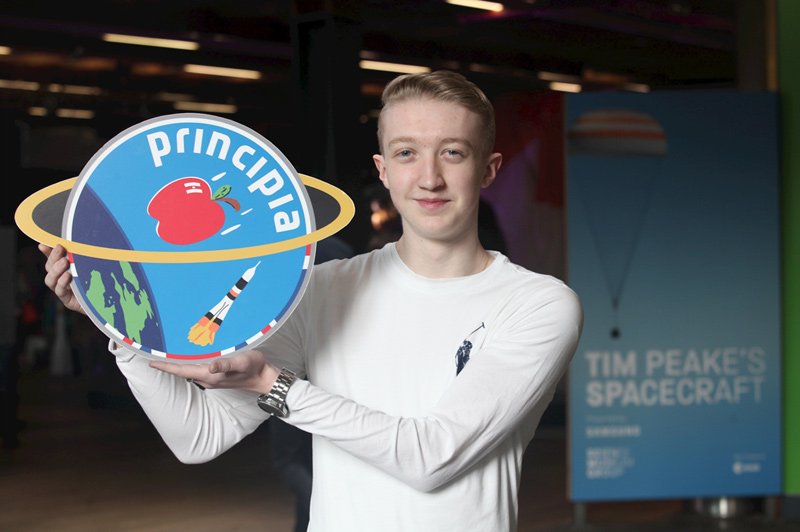 A Trafford schoolboy who won a Blue Peter competition to design Tim Peake’s mission badge enjoyed a VIP visit to the Museum of Science and Industry where the astronaut’s Soyuz spacecraft and Sokol space suit are currently on display.

Troy Wood won the competition in 2014 and has since been using the experience to inspire others, particularly local Scout Association groups.

“Ever since I won the Blue Peter competition to design Tim Peake's mission patch in 2014, I have followed Tim's journey to the International Space Station with interest. From watching the launch at the National Space Centre in Leicester to being invited to Downing Street for Tim's homecoming party, every step of the way has been incredible. I was even being invited to talk at the Principia Schools Conference at York University where I learned that 1.5 million school children had had some sort of involvement in this mission which was amazing.

“It was amazing to visit the exhibition at the Museum of Science and Industry. Tim Peake's Soyuz capsule has literally just landed complete with scorch marks and the huge parachute to slow its descent back to Earth. I enjoyed a very informative talk from a museum guide explaining how the Soyuz rocket works and how Tim came back down to Earth after six months on the ISS. It was also fantastic to see Tim's Sokol KV-2 Spacesuit which would have kept him alive had the rocket depressurised during his journey.”

Troy completed his visit by participating in the Space Descent VR experience at the museum, a virtual reality encounter which puts people in charge of the Soyuz capsule as it returns to Earth, and which is narrated by Tim Peake.

Troy said he would “highly recommend” the experience.

The Soyuz spacecraft is on display as part of a national tour created by global technology innovators Samsung and the Science Museum Group. It is at the Museum of Science and Industry until Sunday 15 May.

For more information or hi-res images, please contact Kat Harrison-Dibbits, Press and PR Manager at the Museum of Science and Industry on 0161 606 0176 or email Kat.Dibbits@msimanchester.org.uk.

Marking the 110th birthday of legendary Russian space chief Sergei Korolev and the the UK-Russia Year of Science and Education, the display of Soyuz TMA-19M celebrates the truly global effort behind space exploration today. Manufactured by RSC Energia for ROSCOSMOS the Russian Space Agency, the Soyuz tells the story of the UK’s first European Space Agency (ESA) astronaut’s journey to the International Space Station (ISS).