The museum’s spectacular new 725 square metre flexible gallery, designed by architects Carmody Groarke opened in May 2021 and has been named one of the best new buildings in the North West. The prestigious RIBA Regional Awards celebrate great architecture across the UK.

"The North West jury were united in their appreciation and admiration of this year’s Regional Award winners. The standout themes were community benefit and re-use through exceptional and trusting Architect and Client relationships, which ultimately created engaging, rigorous and delightful designs. Each scheme contributes significantly to the region in providing sustainable, accessible places for all, important in the gradual evolution of a post-pandemic world. My congratulations to these award-winning projects, which serve as exemplar architectural solutions."

The new gallery was designed to originate and host some of the world's best science exhibitions and experiences in the North, thanks to a generous £3.8 million grant from the DCMS and additional support from other funders.

It has opened-up public access as a gallery space to this part of the much-loved museum's globally significant site for the first time, already welcoming over 110, 000 visitors to critically acclaimed exhibitions Top Secret: from ciphers to cyber security and Cancer Revolution: Science, innovation and hope in under a year. Free tickets can now be booked for the next major exhibition Amazônia, a breathtaking photography exhibition by award-winning photographer Sebastião Salgado, with musical creation by Jean-Michel Jarre. 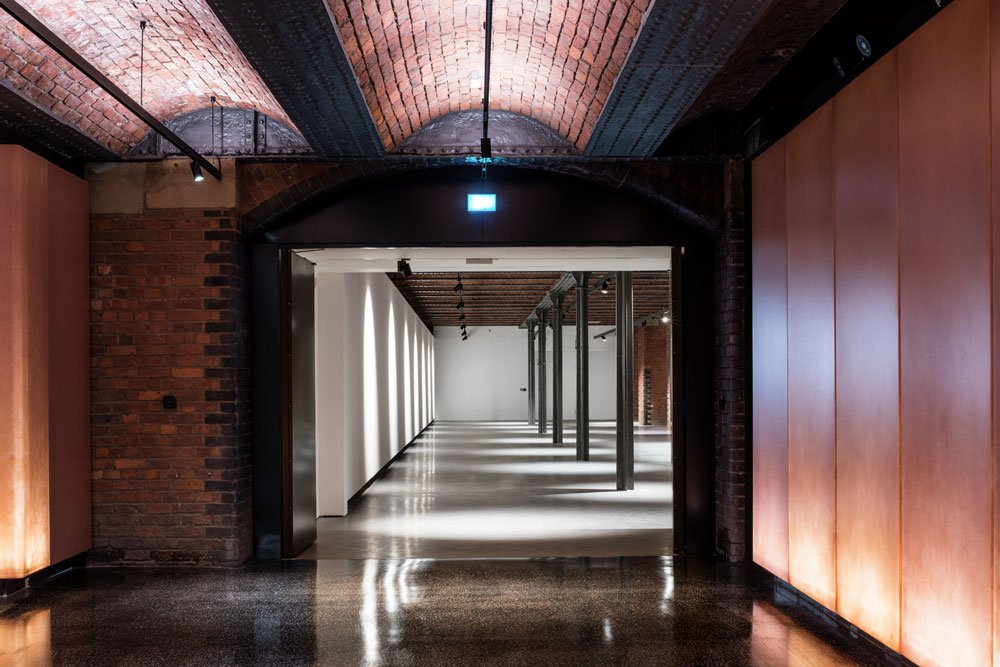 The new gallery, which was also recently named as Heritage Project of the year by the Architect’s Journal, is the first project to be completed in the museum’s long-term multi-million pound restoration programme to conserve its historic buildings, open up new spaces for all to enjoy, play and learn in and to generate vital skills opportunities to support the innovators of the future.

The New Warehouse was built in 1882 from brick, cast and wrought iron and sandstone to provide storage for the Great Western Railway and designed to support the weight of goods wagons entering the building and unloading cargo (which would have been moved through to the lower ground floor through ceiling hatches still visible today). Used as museum stores until recently, the historic fabric of the lower ground floor has been revealed and restored, allowing visitors to experience the grandeur and scale of the original warehouse space while enjoying new exhibition experiences. 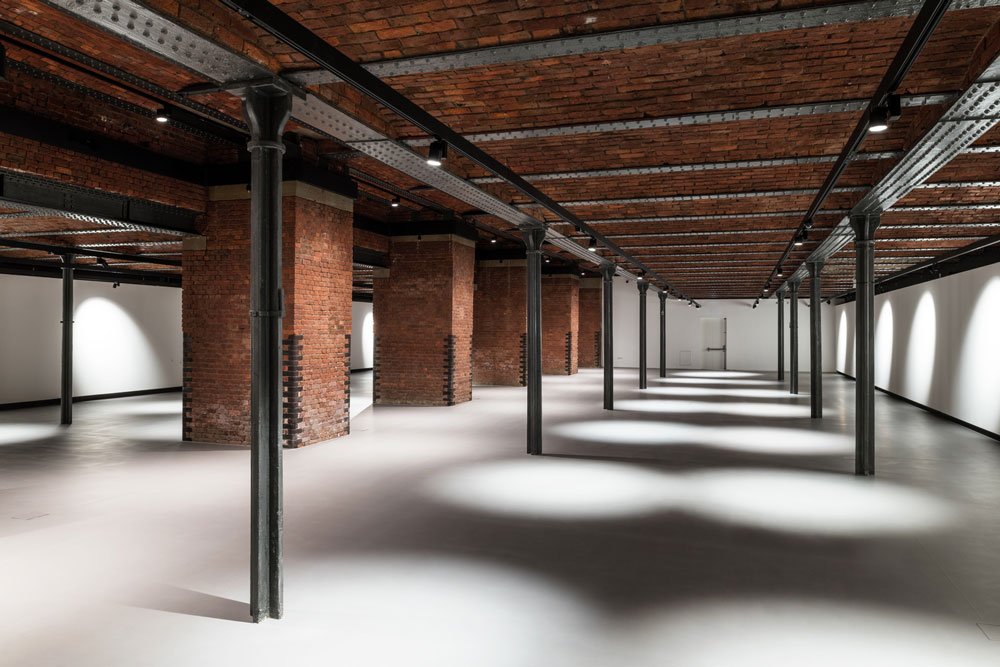 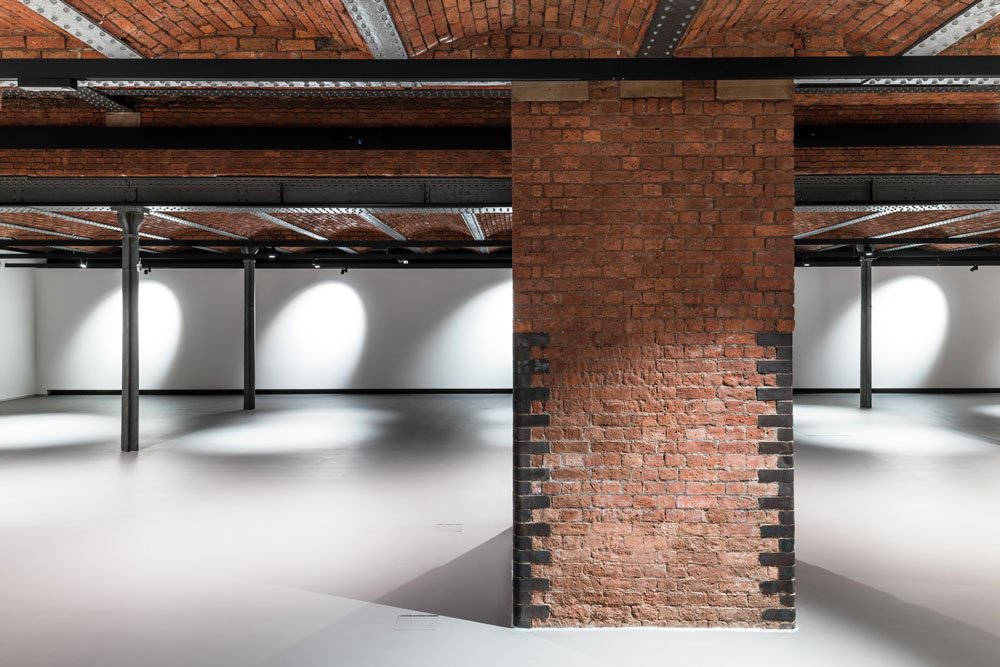 The original and the modern have been combined to pave the way for a sustainable gallery of the future, setting a new design standard for the rest of the masterplan of the museum to follow in years to come.

Key features include beautifully restored Victorian industrial architecture, including thick red brick walls with blue brick detail, steel and brick "jack arch" ceilings, including a focal high section beneath the historic platform above (now the Textiles Gallery on the upper level). These historic features have been enhanced with high quality contemporary materials and design including signature illuminated fibreglass panels (hand-cast by Streamline Fibreglass in Trafford Park) in the external and front of house areas which light the space with a warm glow. In the gallery, new walls house all necessary services for the space and are a blank canvas for exhibitions. 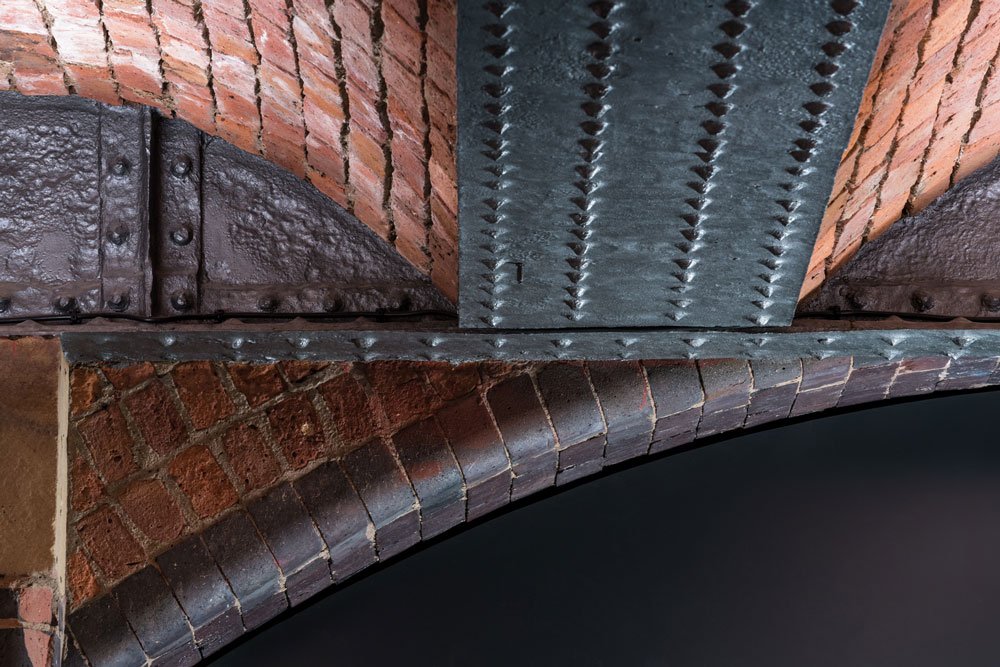 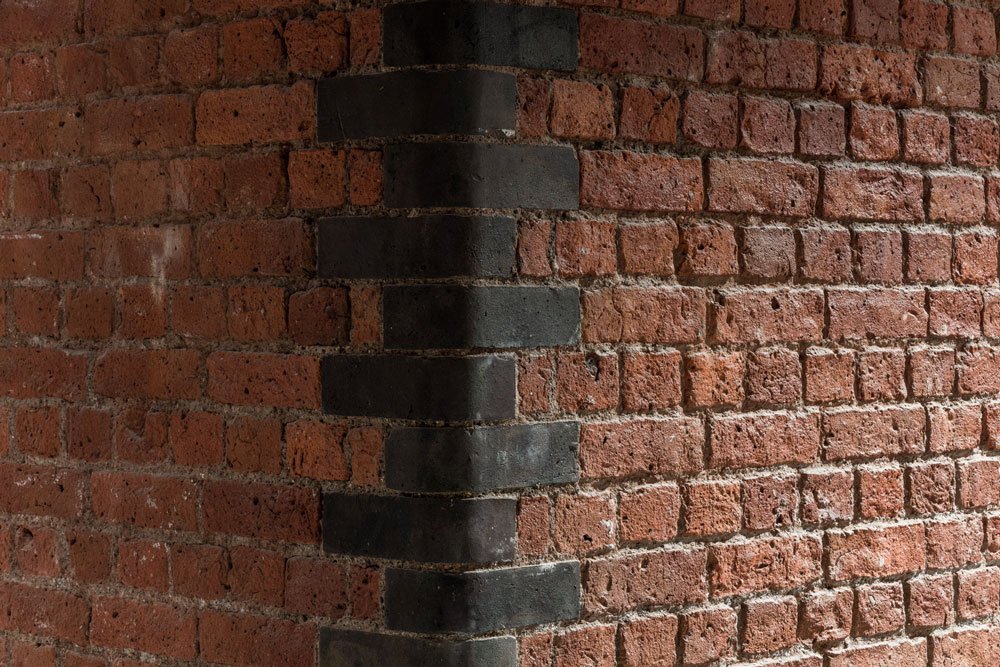 An improved outdoor welcome area in the lower courtyard of the museum is fully accessible and provides stunning vistas under the historic viaduct (also known as the Pineapple Line), with its monumental round cast iron and square sandstone pillars infilled with brick jack-arching. This beautiful colonnade and area of the site will be incorporated in new connections and entrances between the Science and Industry Museum, The Factory and the developing St John's and Castlefield neighbourhoods as this vibrant area of the city comes alive together. 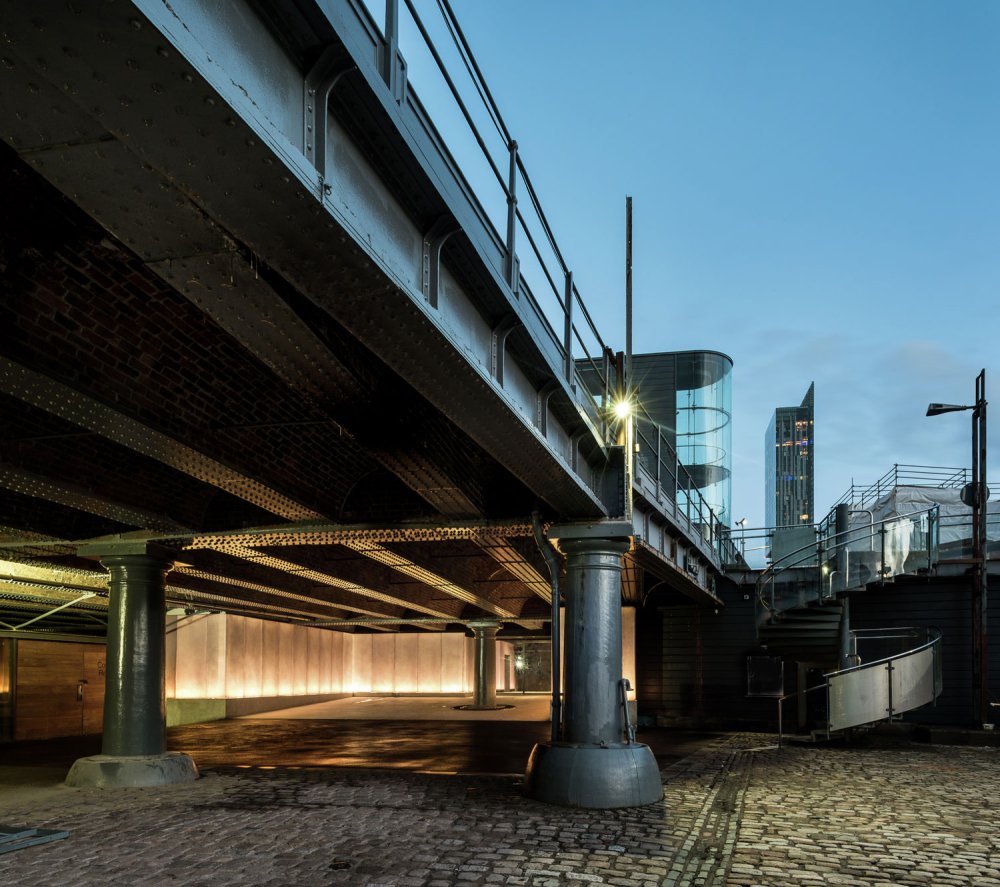 This new gallery, with its generous ceiling heights and apertures, dedicated object preparation and handling facilities, secure access routes and first-rate environmental controls will enable the museum to display larger collection items and set works, as well as provide a better visitor experience and visitor facilities for audiences to explore science in all its forms.

The £5 million Special Exhibitions Gallery was generously funded by the Department for Digital, Culture, Media and Sport, Wellcome and Garfield Weston Foundation, with further support from the Kirby Laing Foundation and The Zochonis Charitable Trust.

The Special Exhibitions Gallery is the first project to be completed in the Science and Industry Museum's multi-million-pound restoration plan, which will conserve and further open up its globally significant buildings and bring to life the story of the site and past, present and future ideas that change the world. Housing the world's oldest surviving passenger railway station and world's first railway warehouse in the heart of the world's first industrial city, alive with science and technology today, a more sustainable museum is being created to provide inspiring experiences for everyone. Information on all current projects including the restoration of the Power Hall can be found on the We are changing page.

Please read Project Director Anna Hesketh's feature on how the project's real beauty lies in the power of combining the original and the modern to pave the way for a sustainable gallery of the future.

The history of the New Warehouse Lower Ground Floor

The Science and Industry Museum's Senior Curator of Industrial Heritage, Katie Belshaw peels back the layers of history in this feature, which reveals why the gallery space itself deserves as much attention as the exhibitions it will host.

The New Warehouse (also known as the Great Western Railway Warehouse) was completed in 1882 with two railway tracks running into its west end from the 1867 viaduct. It represents a state-of-the-art warehouse of the late nineteenth century.

Following a large-scale design competition, architects and principal designers Carmody Groarke were appointed in November 2015. A decision was made to move the location of the Special Exhibitions Gallery to the preferred position of the New Warehouse following investigation work that uncovered that the initial proposed location of the museum's historic 1830 viaduct was less suitable for housing fragile or sensitive objects. The 1830 viaduct and interlinked structures of the Station Building and 1830 Warehouse will also be further restored with initial work commencing this year.

Since establishing in 2006, Carmody Groarke have developed a reputation for working internationally on a wide range of arts, cultural and heritage projects. They recently completed the critically acclaimed Windermere Jetty Museum in the Lake District, and a temporary museum for Charles Rennie Mackintosh's Hill House near Glasgow, and they are currently designing a significant new zero-carbon exhibition and events building for the Design Museum in Ghent, within the UNESCO world heritage city context. Carmody Groarke's work has been recognised through several prestigious architectural awards, including the Civic Trust National Panel Special Award 2020, the Architects' Journal Building of the Year 2019 and Building Design Architect of the Year 2018. Two monographs of the practice's work have been published by the world renowned El Croquis and 2G.

Following a public procurement process, HH Smith & Sons was appointed in October 2019 as the main building contractor for the Special Exhibitions Gallery project. Established in 1955, HH Smith & Sons are a family construction company based in north Manchester and have recently completed the Halle St. Peter's project.

Further members of the project team led by Project Director Anna Hesketh and Client Project Manager Mark Tomlinson for the Science and Industry Museum include:

Wellcome exists to improve health by helping great ideas to thrive. We support researchers, we take on big health challenges, we campaign for better science, and we help everyone get involved with science and health research. We are a politically and financially independent foundation.

Established over 60 years ago in 1958, the Garfield Weston Foundation is a family-founded, grant-making charity which supports causes across the UK and gave over £88 million last year. It has donated well over £1 billion to charities since it was established.

One of the most respected charitable institutions in the UK, the Weston Family Trustees are descendants of the founder and they take a highly active and hands-on approach. The Foundation's funding comes from an endowment of shares in the family business which includes Twinings, Primark, Kingsmill (all part of Associated British Foods Plc) and Fortnum & Mason, amongst others—a successful model that still endures today; as the businesses have grown, so too have the charitable donations.

From small community organisations to large national institutions, the Foundation supports a broad range of charities and activities that make a positive impact in the communities in which they work. Around 2,000 charities across the UK benefit each year from the Foundation's grants.