Aviation in Manchester: How the city took to the skies

From the first days of powered flight, pioneering pilots and engineers in Manchester have been at the forefront of aviation design and innovation.

Throughout the 20th century, Manchester was a hub of aviation innovation. In this story, we take a look at some of the people and companies who made Manchester a centre of aviation excellence, sometimes motivated by a spirit of adventure, sometimes by the demands of war.

Ever since aeroplanes were still built from wood, paper and bicycle parts, Manchester’s engineers have made major contributions to aviation.

In 1909, Alliott Verdon-Roe built and flew the Roe 1 Triplane, the first all-British aeroplane. Roe was born in Patricroft, near Salford, in 1877. He dreamed of flying from an early age and experimented by building model aircrafts. One of these won a £75 prize in a Daily Mail-sponsored competition and he put this money towards building his first full-size aeroplane. Alliott and his brother Humphrey formed A V Roe and Company in 1910. 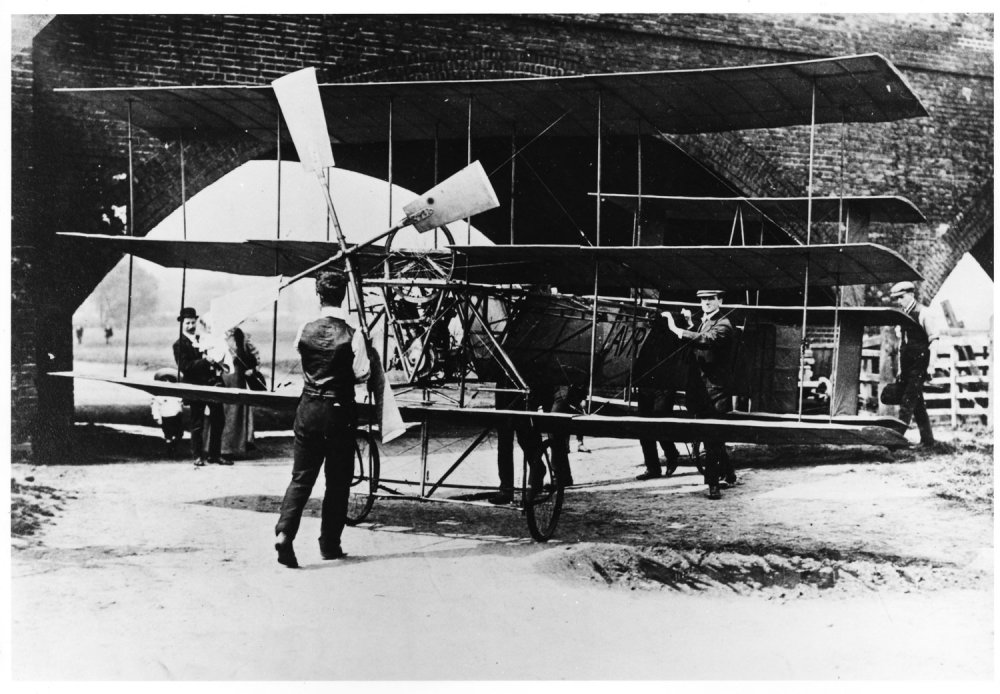 Avro employees working on an experimental triplane, about 1910.

They set up a workshop in the basement of Brownsfield Mill, a cotton mill in Ancoats, Manchester. A V Roe and Company (or Avro) was the first company in the world to be registered as an aircraft manufacturer. The company became a leader in British aircraft design, building aeroplanes for use in both world wars.

The company quickly outgrew their Ancoats premises, expanding to larger factories across Manchester and setting up their huge assembly plant at Woodford in 1924 (now the site of the Avro Heritage Museum). The skills and innovative ideas of Avro’s employees produced some of the most important aircraft of the 20th century. Their chief designer, Roy Chadwick, was a particularly talented designer who was integral to the company’s success. 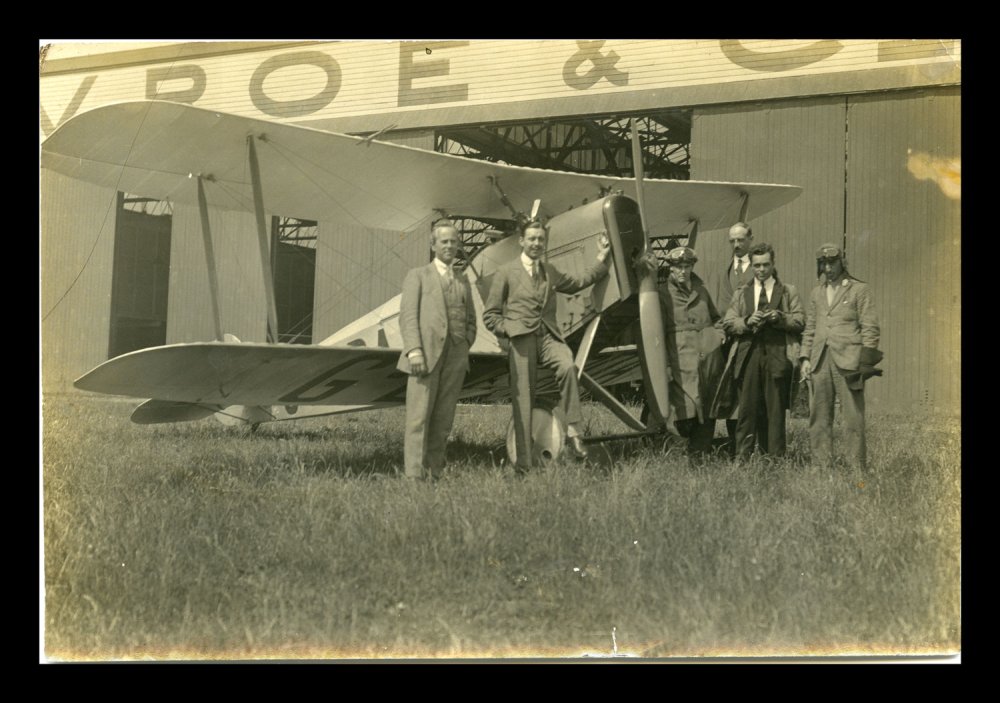 Left to right in the front row: Sir Alliott Verdon-Roe, Roy Chadwick, Russian pilot Mr Gwaiter, and Australian pilot Bert Hinkler, posing alongside an AVRO Baby light aeroplane in 1922. The men on the far right and behind are unnamed.

'In this business, you know, you have to always be looking ahead.'

As a boy, Roy Chadwick was fascinated by the new idea of aeroplanes. He was 10 years old when the first powered aeroplane took flight in 1903. He was determined to design them himself. He studied at the Manchester College of Technology and joined the Manchester Aero Club and, through its activities, visited the A.V. Roe & Co. factory at Brownsfield Mill in Ancoats.

In 1911, at only 18 years old, Roy Chadwick joined pioneer Manchester aeroplane designer A.V. Roe in his brand-new Ancoats aeroplane factory as his draughtsman and personal assistant. He showed a great talent for design and his career progressed rapidly.

By the time he was 26, he was appointed as Avro's chief designer. He remained in this position until he was tragically killed in the crash of the Tudor 2 prototype in 1947. Chadwick designed some of Britain’s most iconic aircraft, including the Lancaster and the Vulcan. 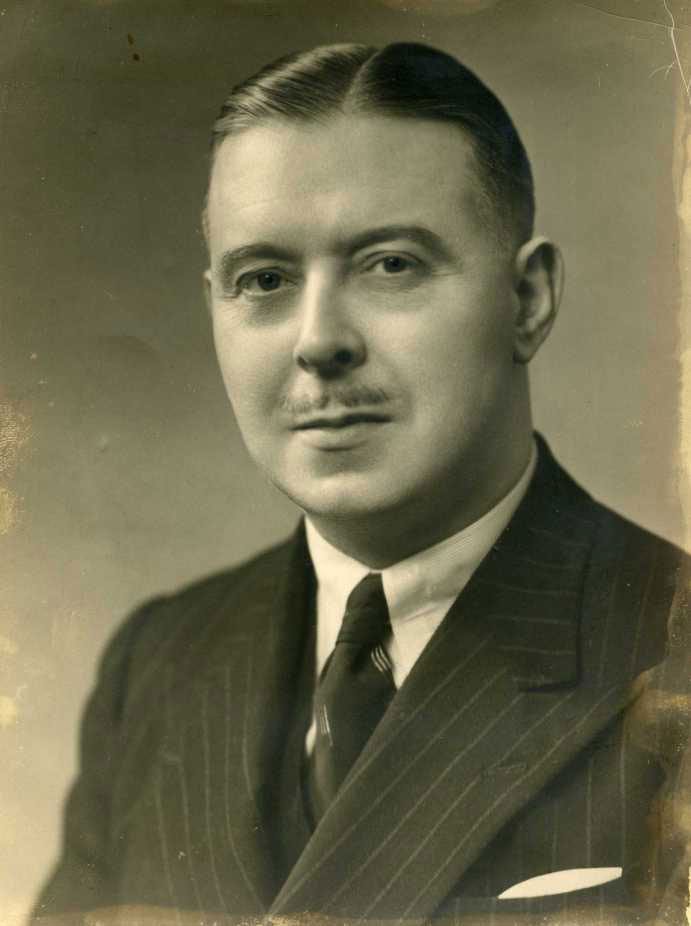 Avro innovations were often driven by the needs of war. Their aircraft saw active service in conflicts throughout the 20th century. Early in his career, chief designer Roy Chadwick designed the fuselage and undercarriage for the famous AVRO 504, which became the standard training aircraft used by the Royal Air Force. In 1918, during the First World War, 500 of these planes were being made per month.

At about the same time as Roy Chadwick was working on the AVRO 504 at A. V. Roe and Co, another aviation breakthrough was about to be made. The first non-stop transatlantic flight was achieved in 1919 by Manchester aviators John Alcock and Arthur Whitten Brown. You can read about their pioneering, hair-raising first Atlantic crossing below.

Flights between Europe and North America are now such a part of everyday life that it's easy to forget we've only been crossing the Atlantic by air since 1919. But how was the first flight achieved, and by whom?

In 1928 A.V. Roe sold his interest in the company to Manchester’s Siddeley group who continued to produce Avro aeroplanes. Immediately following the Second World War, Avro designed and built the iconic Shackleton. 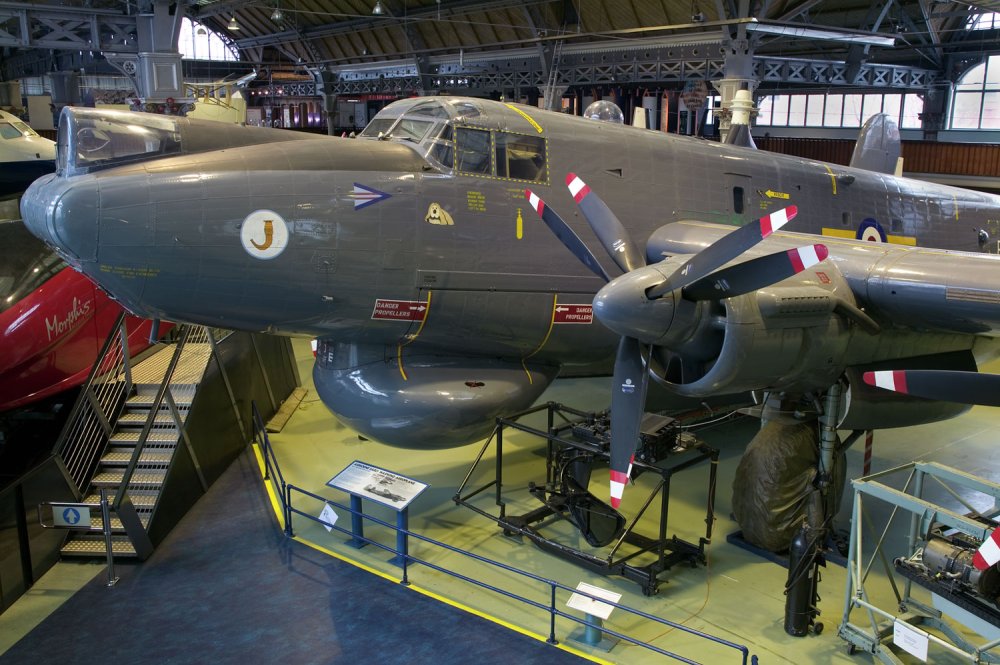 The Shackleton, built at Woodford in Cheshire, was a British long-range maritime patrol aircraft for use by the Royal Air Force between 1951 and 1990. For nearly 40 years the Avro Shackleton was Britain’s first line of defence in the Cold War. Developed from 1947 as a maritime reconnaissance plane, it could stay in the air for up to 24 hours. The cabin was fitted with bunks and a small kitchen so the two crews could take shifts.

In 1947, the British government issued a call to aircraft manufacturers to design and produce a medium-range jet bomber capable of delivering nuclear bombs, as part of Britain’s nuclear deterrent policy.

Ultimately, Avro responded with the Vulcan, a jet-powered, tailless, delta-wing strategic bomber which first flew in 1952. It had a revolutionary wing design that was ahead of its time. To develop the final Vulcan design, Avro designers tested and improved the delta-wing design. The AVRO 707 was a small experimental aircraft built to test out the advantages of the delta-wing shape and iron out any issues. 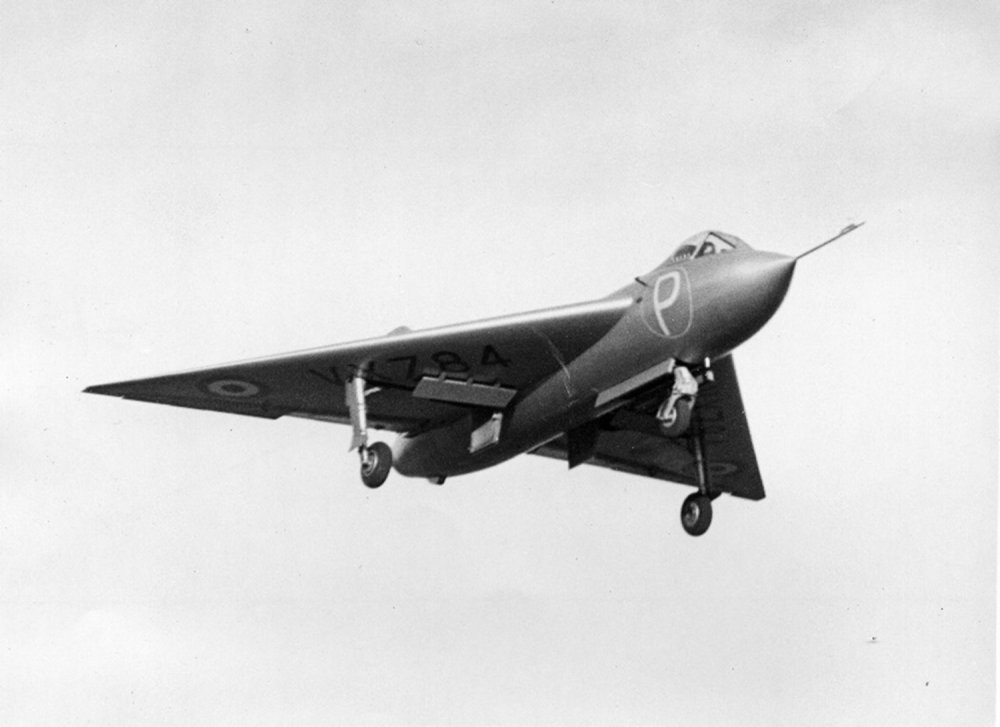 The aerodynamic properties of new aircraft designs were put to the test in carefully controlled wind tunnel experiments. Precision crafted scale models of aircrafts were used, made from wood and metal.

From detecting targets to landing safely in dangerous conditions, the development of radar was essential to aeronautics. Imagine trying to land a plane the size of a building on a dark and foggy night. How will you ensure that you don’t hit anything? Pilots get around this by using radar.

Radar scanners use radio waves to detect nearby objects. A transmitter located on the scanner sends out radio waves which travel at the speed of light until they hit something. Reflected radio waves are then picked up by the radar system.

The reflected radio waves are displayed on a screen which is monitored by an operator. Blobs of light on the radar could be anything from an oil rig to an enemy aircraft. It takes a skilled operator to tell the difference.

There are some fascinating examples of key moments in the development of radar technology in the Science Museum Group collection.

The Telecommunications Research Establishment (TRE) was a UK research and development organisation set up in the Second World War to develop new technology to help RAF aircraft navigate and detect enemy targets. In 1942, TRE set up a team to develop a means of identifying bombing targets at night and in bad weather. This team was led by Sir Bernard Lovell. Lovell’s team produced the H2S 9.1 cm radar that improved greatly the Royal Air Force’s bombing accuracy. Later versions of H2S used reduced wavelengths. The 1.5 cm wavelength set was able to detect rain clouds. This example was fitted to an Avro Vulcan B2 bomber.

After the war, Sir Bernard Lovell moved to the University of Manchester and in 1945 established the Jodrell Bank Observatory. Freddy Williams, another engineer working on radar technology at TRE, also moved to Manchester after the war where he used his advanced radar knowledge to create the Manchester Baby computer, the world’s first stored program computer in 1948.

Radar can also be used to identify aerial enemy targets. The AI-24 was developed by Manchester companies Ferranti Ltd and Marconi Ltd to allow the Panavia Tornado F3 to locate and shoot down targets beyond the visual range in all weathers.

During the Second World War, the race was on to develop practical, working jet engines. It was a cutting-edge new idea for fast and powerful internal combustion engines to power jet aircraft.

These important Manchester-made engines and compressors were the forerunners of today’s aircraft propulsion systems. In less than 30 years, aircraft technology developed in Manchester had transformed from the earliest hair-raising experimental Avro Roe 1 Triplane made of wood and paper to super-advanced jet engines, transforming the way we travel.

From Alliott Verdon-Roe's flight of the first British built aeroplane, to Chadwick's deadly Lancaster and Vulcan aircraft, to Ferranti's radar systems and Rolls Royce's powerful engines, Manchester has been integral to the history of British aviation. 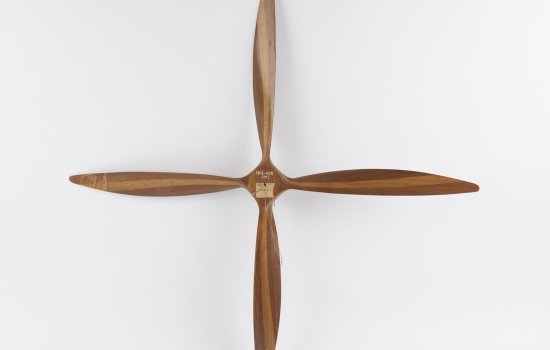 Look to the skies and trace the history of aeroengines from the 19th century to the near present with this globally significant range of engines, from steam-powered to Concorde supersonic. 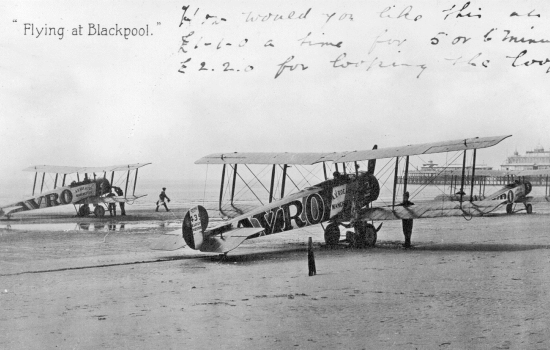 Did you know that it's over 100 years since the first scheduled domestic air service in Britain? 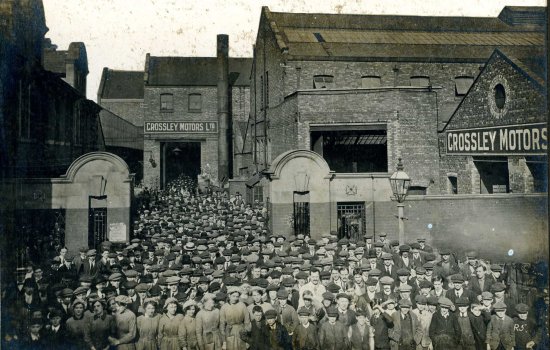 Today we don’t associate Manchester with car manufacturing, but in 1914 at the start of the First World War, it was one of the biggest motor manufacturing cities in the world.