Since the emergence of the very first 'velocipedes', Manchester has nurtured and developed competitive cyclists and bike makers. Find out how the city region has led the way in producing both world-class riders and bicycles for over 150 years.

Manchester has a long track record of success in the world of competitive cycling, exemplified by this report from the British Empire Games in 1934:

"Manchester vs the rest of the World": In the British cycling world these days Manchester has won such a supreme position that it is almost a case of Manchester vs the Rest of the World. The three musketeers of the pedal, Sibbit, Cozens and Higgins, are the most famous trio in the country. It is a single honour to the city, and to the Manchester Wheelers in particular, that these three boys should form three-quarters of our team to compete in Copenhagen against the pick of the world.

The British Empire Games of 1934 were held in Wembley Park, London. The only event to take place outside London was the track cycling. It took place 200 miles away in Manchester’s Fallowfield athletic stadium and velodrome. Manchester—having a developed cycling infrastructure—was the most appropriate stadium to host this international event. The Fallowfield stadium in its heyday could attract crowds in excess of 14,000 supporters and served as the city’s cycling track from 1892 to the early 1970s. Manchester’s homegrown talent ‘Wilf’ Higgins and ‘Jack’ Sibbit wowed their home crowd as they competed in the games. Manchester’s dominance in cycling was taking shape. 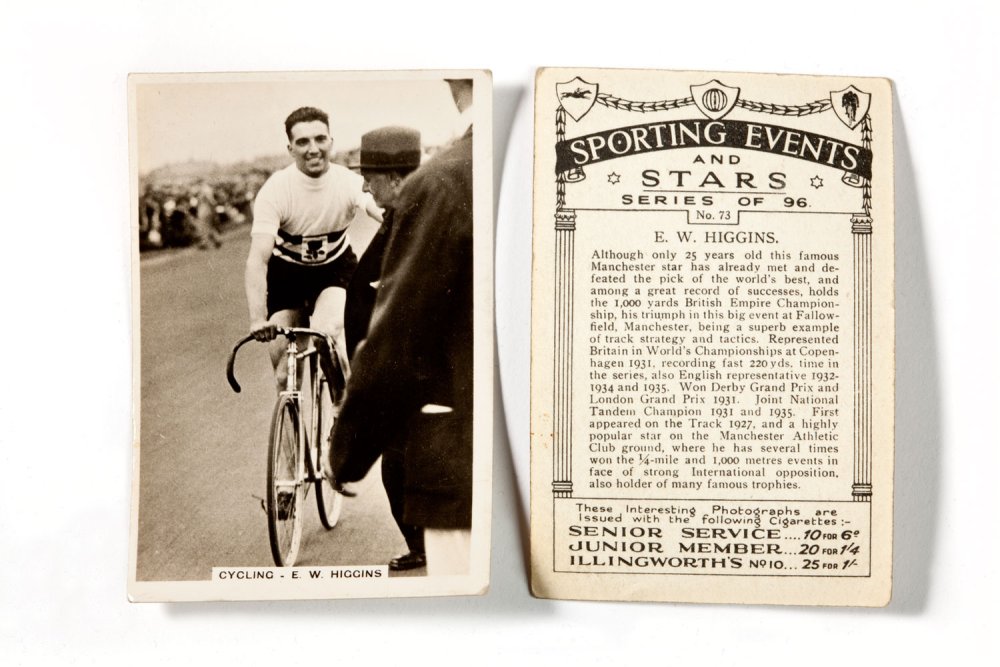 Ernest ‘Wilf’ Higgins (1908–96). A notable member of the Manchester Wheelers, said to be the most successful cycling club in Britain. 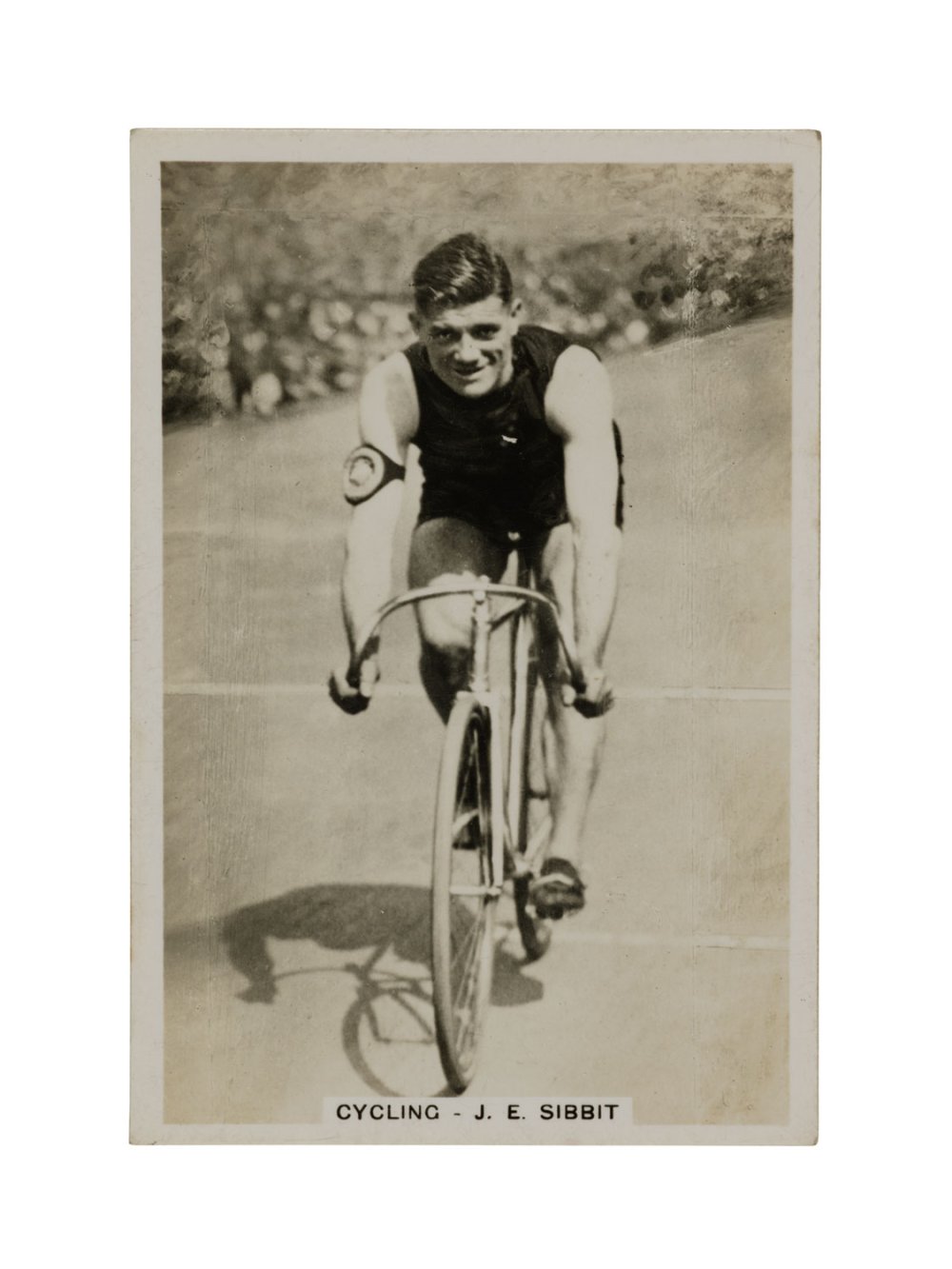 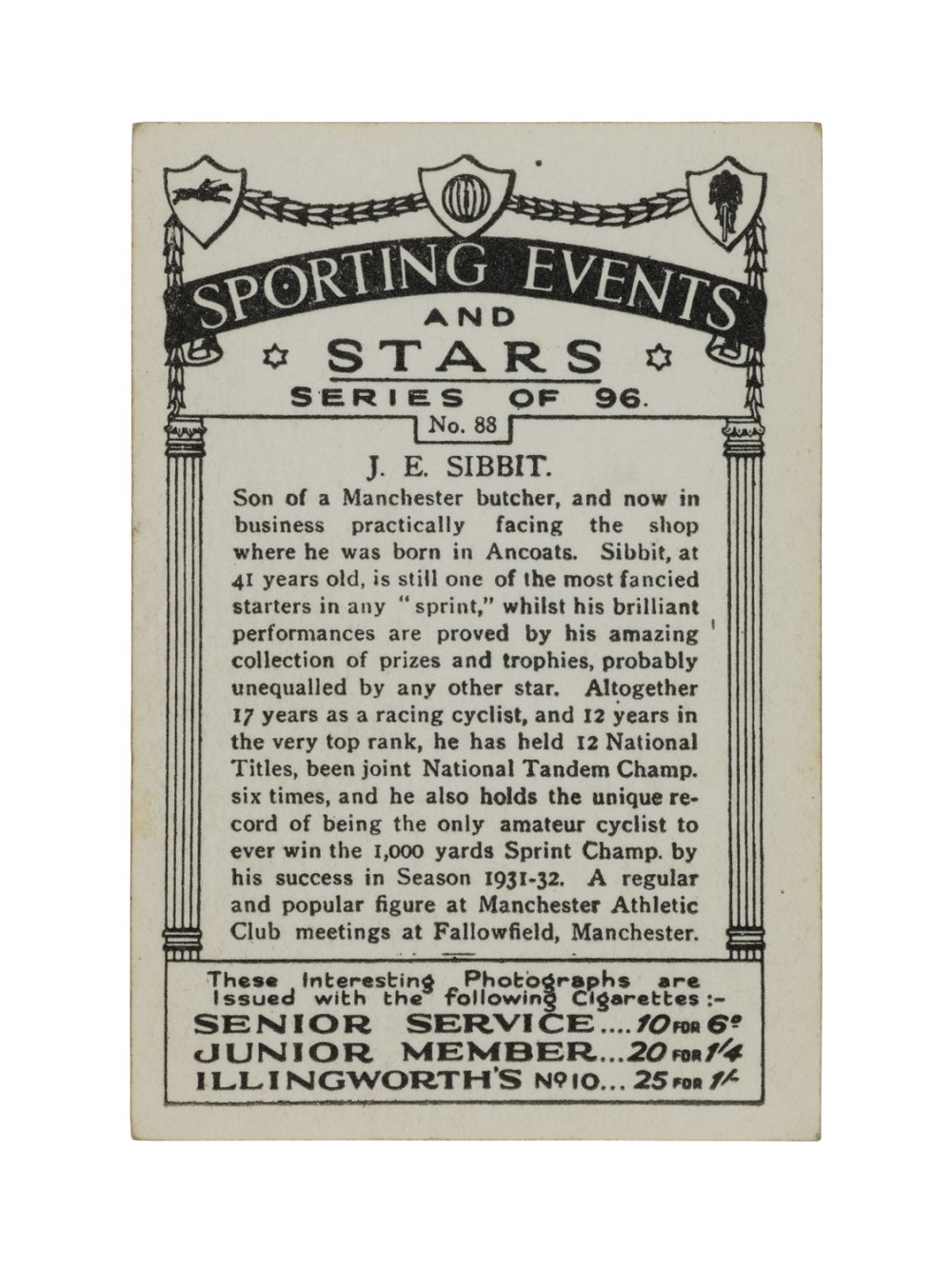 Sporting Events and Stars cigarette card No. 88. John “Jack” Ephraim Sibbit (1895–1950). As a member of the Manchester Wheelers he was a regular favourite at the Fallowfield track. By the age of 41 he held 12 national titles including tandem sprints.

Bury-born Reg Harris was Britain’s first cycling mega-star. He sold out grandstands whenever he raced. In 1944, aged 24, he became the national track champion. At the 1948 Olympics, tipped to dominate the medal table, he won two silver medals. Possibly a slight disappointment, but not if you consider he had fractured two bones in a car accident just weeks before the Olympics, and then injured his arm in a warm-up event in Fallowfield. He went on to win the world professional title five times, as well as being voted Sportsman of the Year twice.

He was a devoted member of Manchester Wheelers, and as a professional he was sponsored by Raleigh, often seen with slogans such as ‘Reg rides a Raleigh’. He had a very long and successful career, still competing and winning titles at the age of 54. 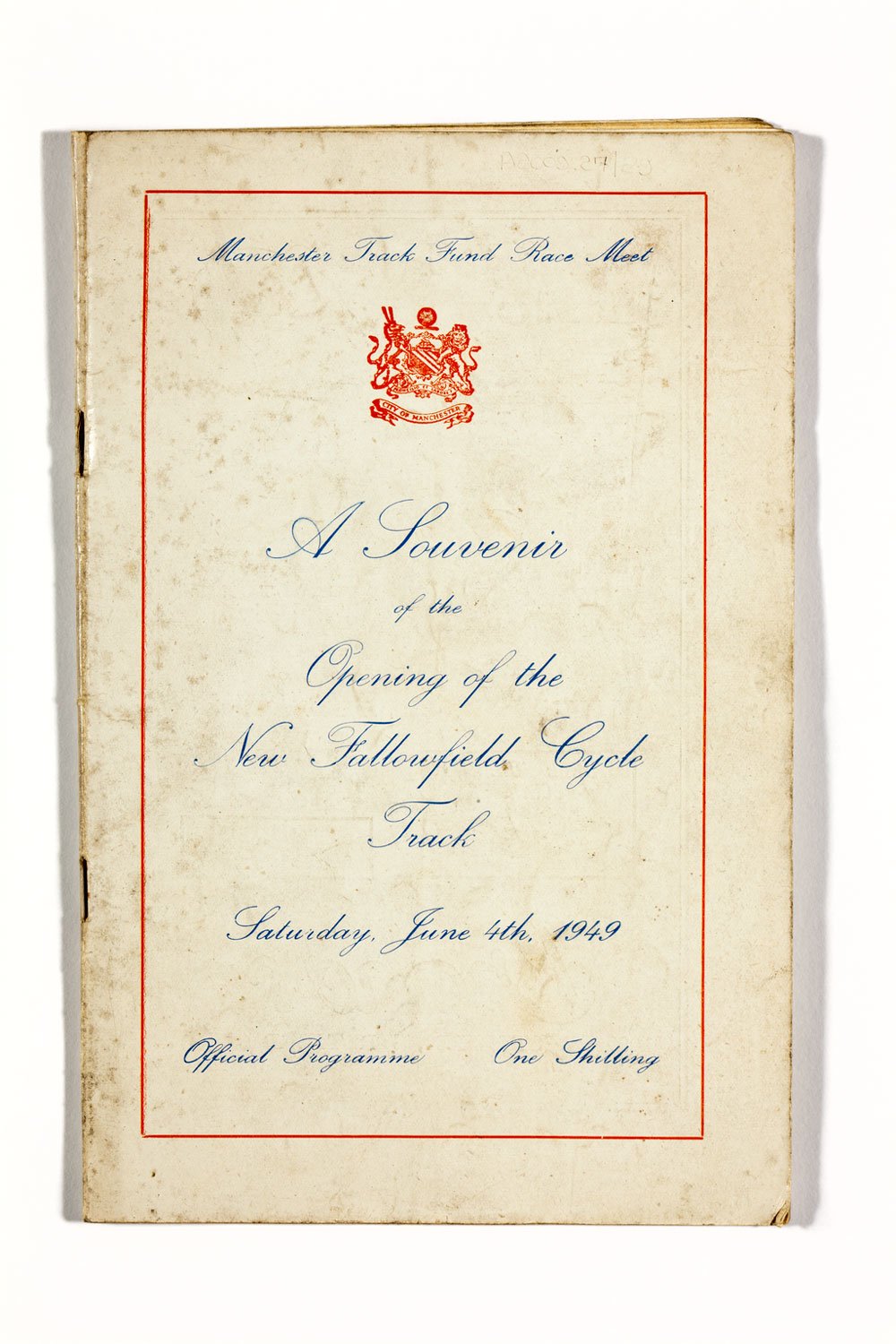 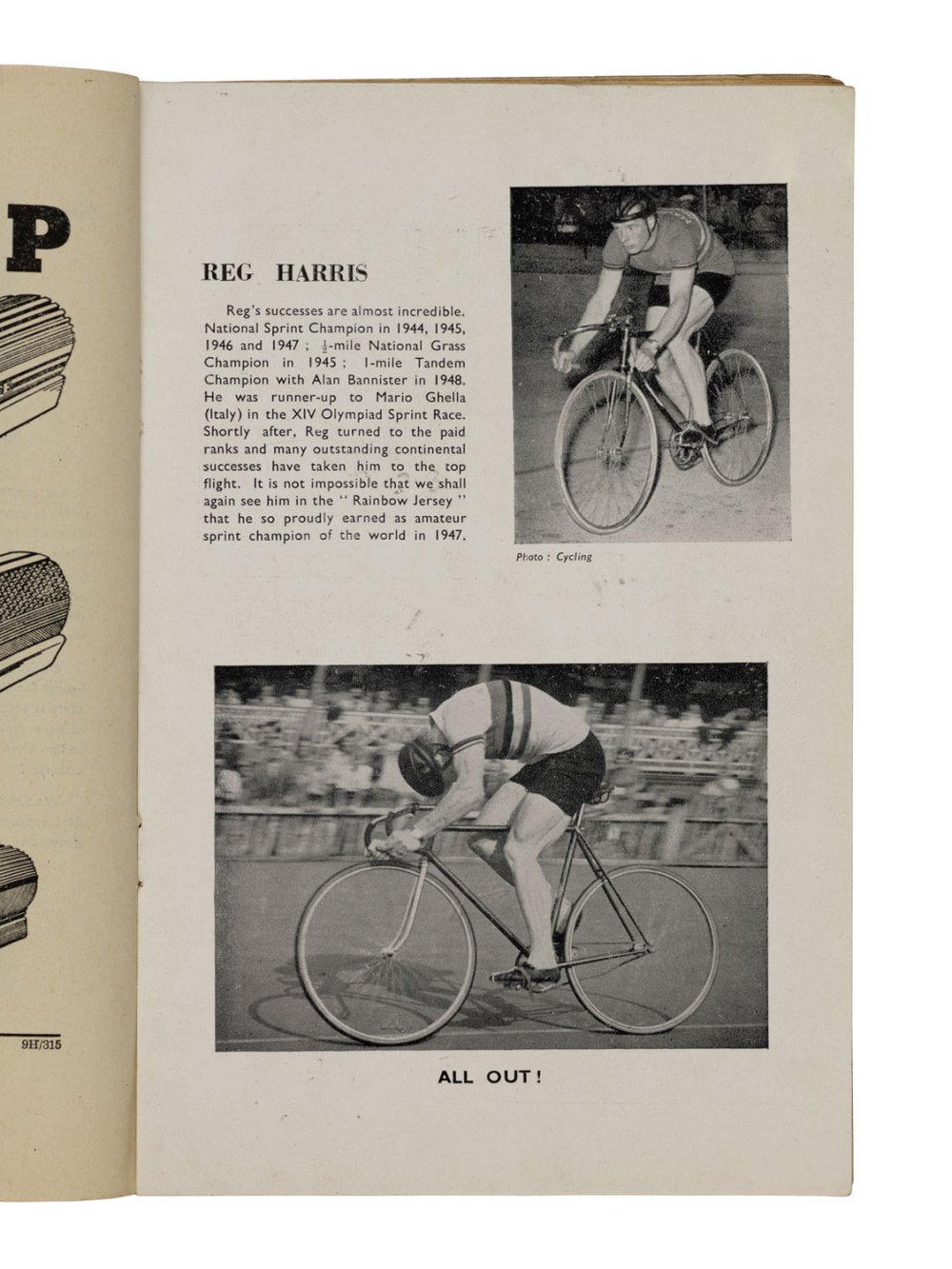 It wasn’t just the Manchester riders that had a great reputation—Manchester has its fair share of world-class bike builders, too. By 1900 there were roughly 160 cycle makers and agents within a two-mile radius of the city centre. Pemberton, Royal Ruby, Ralpho and Claviger were already making their way in the Manchester cycling industry. Within a short ride of Manchester there were 25 listed cycle makers, 17 of these in towns south of the city centre. Affluent middle-class towns such as Altrincham had as many as four cycle makers, whereas Stockport had none. Bicycles would have been out of reach to most of the population of Manchester, costing many months’ wages.

Pemberton bicycles were ‘famous for finish’. They were not cheap, costing up to three months' wages for an apprentice engineer in the 1940s. Edward Pemberton opened his first bike shop on Ashton Old Road in 1896. The family became embedded in the cycling community in Manchester, centred around the Manchester Wheelers and the velodrome in Fallowfield. Edward’s grandson Harold eventually closed the business due to ill health after 86 years of trading. It was a true family business that stayed open through two world wars and three generations, making Pemberton’s the longest running bike producers in Manchester.

Manchester’s bike builders really understood cycling as they were often successful competitive cyclists themselves. Johnny Berry was one such bike expert—a team mechanic at the 1948 Olympic Games, he became a Manchester frame-builder of great national and international reputation. He was an avid cyclist and an active member of the Manchester Wheelers. His shop was a well-known sight in Rusholme where for 28 years Berry built and refined his bike designs in the workshop at the back.

Sibbit, as well as being a world-class cyclist, was also a skilled bike builder. He made this tandem around the same time that he won silver in the 1928 Olympics. It is said he didn’t compete in the 1932 Games because he couldn’t afford to close his shop.

Today in Barnoldswick, Lancashire, another generation of bike enthusiasts are making an impact on the biggest of sporting stages. British Cycling’s research and development team, based in Manchester, approached local company Hope Technology to partner up with Lotus and Renishaw to design and build the track bikes for the Great British cycling Olympic and Paralympic competitors.

The design and manufacture of these bikes are radical. Importantly, the wheels are made using a new single mould technique and the wheel forks following the shape of the riders’ legs. It may look unconventional but with the design taking the rider into consideration there are aerodynamic benefits: an aerodynamic package with the rider rather than just an aerodynamic bike. Hope Technology have created an extraordinary, medal-winning bike with an innovative design. 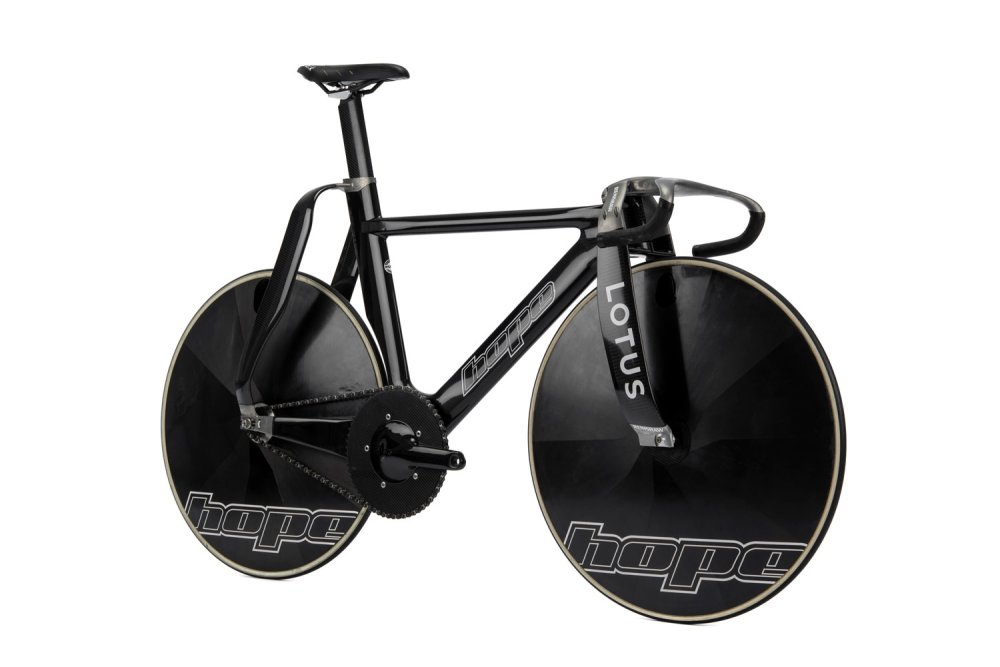 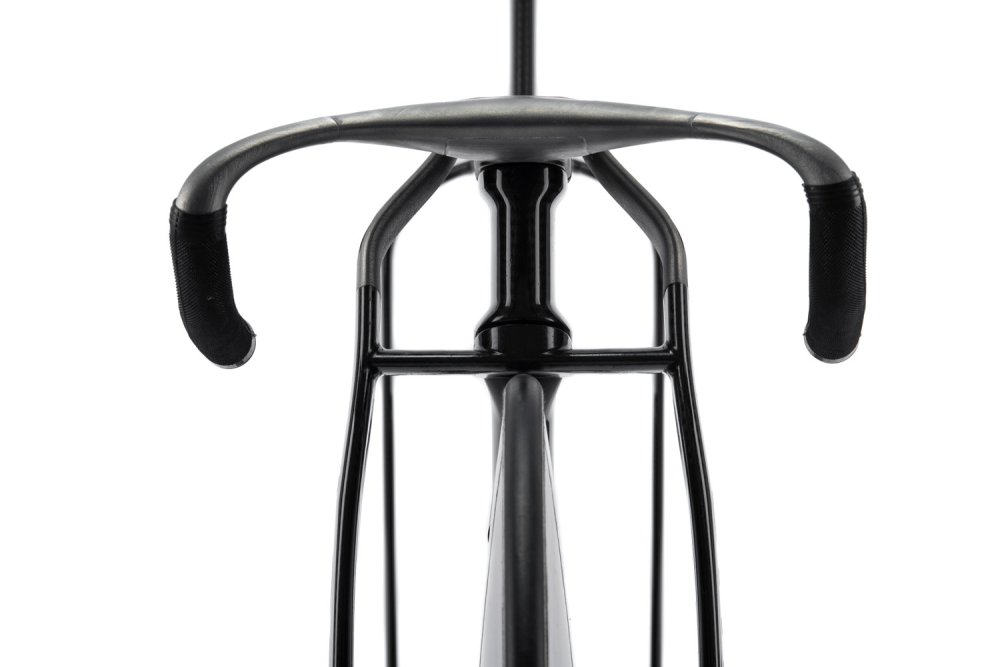 Hope Tech HB.T bike ridden by Olympic and Paralympic athletes at the Tokyo Games in 2021. The radical design proved very successful on the road and track.

The home of British Cycling

"If the Velodrome was a country, it would stand eighth in the overall London 2012 medal table—ahead of Germany and with the same number of gold medals as Australia, Japan and Kenya combined."

Cyclists based in Manchester are once again dominating the sport; this time, thanks to the velodrome to the east of the city centre, the National Cycling Centre. Opened in 1994 on the site of the demolished Stuart Street power station, it was the UK’s first Olympic-standard indoor velodrome track. It was a keystone in the city’s ambitious plans to regenerate East Manchester. It spearheaded a scheme that has gone on to create Sportcity, one of the largest concentrations of sporting venues in Europe, including the City of Manchester Stadium (also known as the Etihad Stadium) and English Institute of Sport. It has played host to countless international competitions, including the 2002 Commonwealth Games.

The velodrome’s unique community comprises everyone from Britain’s elite cyclists to novices and youth riders. It claims to be the busiest venue of its kind in the world, and it continues to grow and improve. It was extended in 2010 with the addition of the UK’s first indoor BMX Centre, while in July 2021 it was announced that £26 million was going to be spent on the site in order to maintain its reputation as one of the world’s most accessible velodromes. 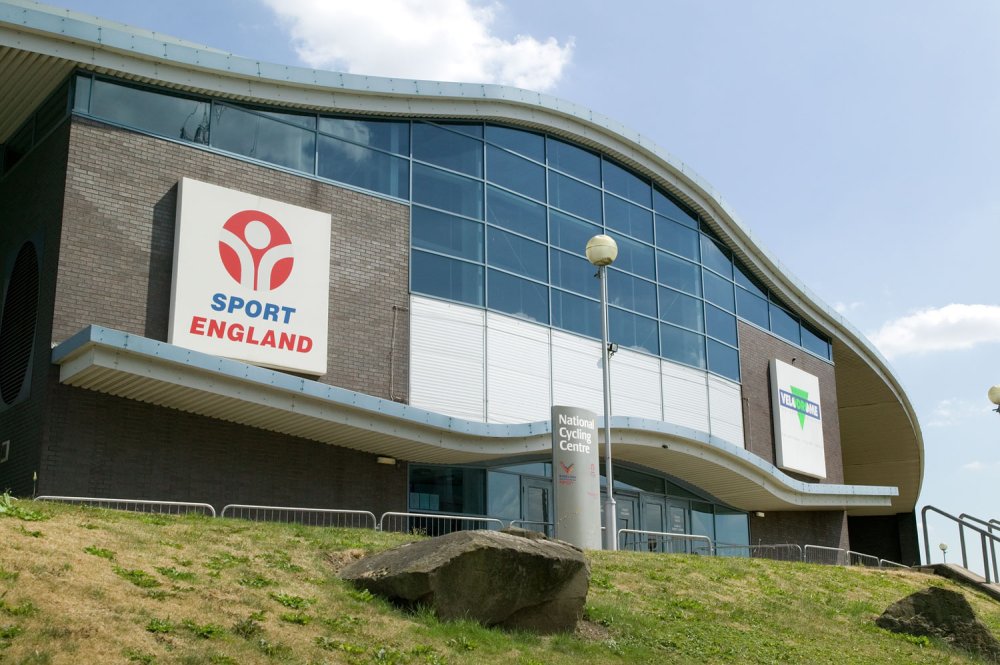 The National Cycling Centre, Stuart St, Manchester, 2016. Home to British Cycling, where all the modern British cycling greats have trained and competed.

British Cycling, based at the Manchester velodrome, is the largest cycling organisation in Britain and is the national governing body for cycle sports (BMX, mountain bike, cyclo-cross, road, track and cycle speedway). Olympic gold medallist Jason Kenny started out with the Eastlands Velo youth team cycling on this track.  And Jason Queally went from a taster session to Olympic gold at the Sydney games in just four years.

From Chris Hoy to Victoria Pendleton, Bradley Wiggins and the phenomenal Laura and Jason Kenny, Britain’s most successful riders have all based their training in Manchester’s velodrome. The facility's success earned it the nickname the ‘Gold Medal Factory’. The importance of this venue and its staff cannot be underestimated in the story of British cycling.

Still ahead of the curve

Dame Sarah Story, born in Eccles in 1977, still lives and trains near the National Cycling Centre. She is the most decorated British Paralympian or Olympian of all time, competing in the Paralympics in eight consecutive occasions from 1992 to 2020 (2021). She has achieved an astonishing 28 Paralympic medals including 17 golds. She started her sporting career as a swimmer. After the 2004 games she took to cycling at the velodrome in Manchester to keep up her fitness while a recurring ear infection kept her out of the pool. In the following games in 2008 she cycled to victory, winning two gold medals in the Time Trial and Individual Pursuit, and she continues to focus on cycling.

Amazingly she would have been seven years old before she even saw a woman competing in an Olympic or Paralympic cycling event. Although cycling has been included in the men's Olympic events since the first modern games in 1896 it wasn't until the 1984 Olympics that women were allowed to compete. In 2012 she was awarded the BBC Sports Personality of the Year and was shortlisted again in 2021. 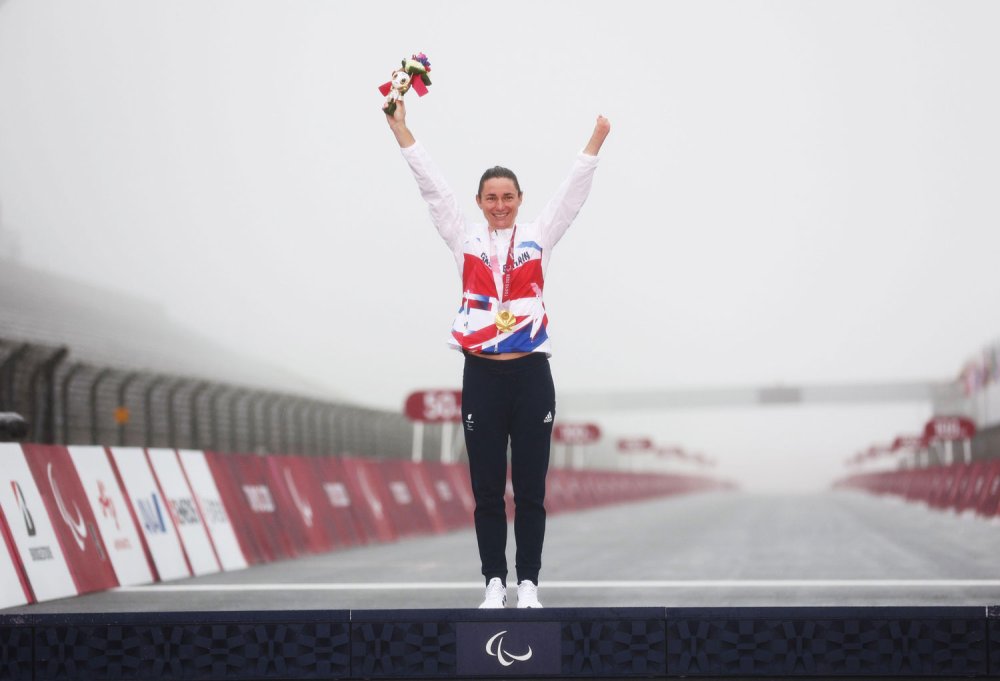 Mancunians keep on creating cycling history. The BMX cyclist Charlotte Worthington, from Withington, won gold in the Tokyo Olympics, the first games to include Freestyle BMX. She landed a stunning backflip 360 in the freestyle final. It had never been landed by a female BMX rider in any competition in history. The legacy of this achievement is already making its way from the headquarters of British Cycling to the skateparks and BMX tracks across the country. British Cycling have announced funding for BMX freestyle that covers everything from UK skateparks to coaching and a drive to increase female participation. 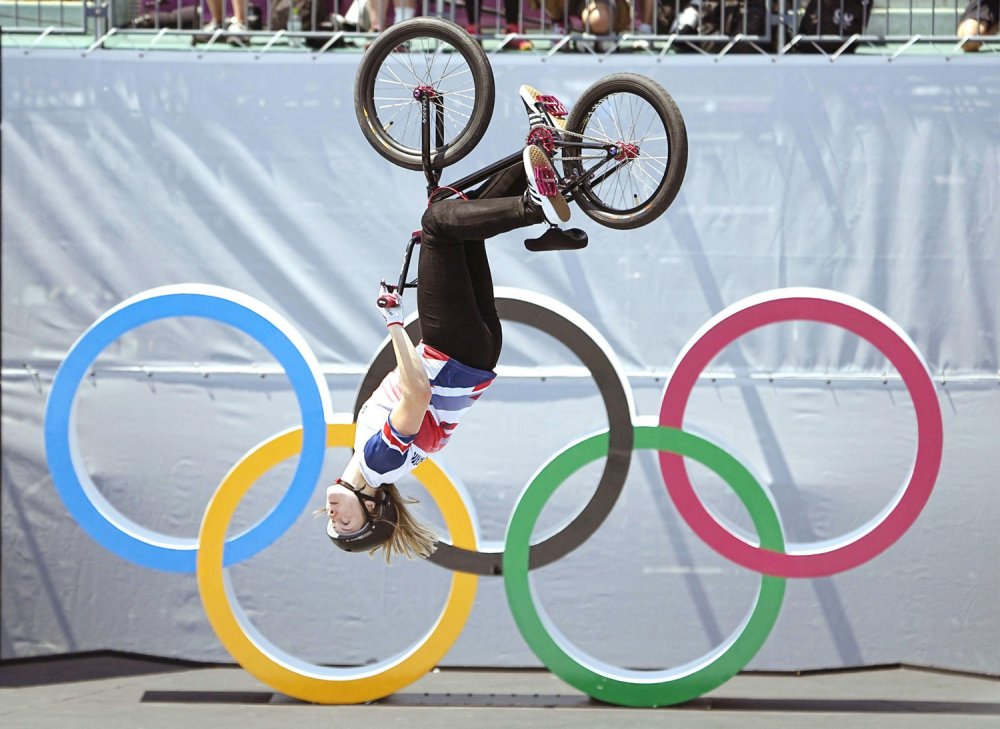 To compound Manchester's claim to being the heart of Britain’s cycling ambitions and to acknowledge its place as the home of cycling greats, the inaugural induction ceremony for the Cycling Hall of Fame was hosted in Manchester in February 2010. And in October 2021, the GB Olympic and Paralympic Cycling Team (2008) were given Freedom of the City of Manchester.

Cycling in Manchester is going from strength to strength. It’s now more inclusive than ever before. Elite cycling may still be out of reach for many people but with so many grassroots programmes and the now legendary Velodrome in East Manchester expanding cycling as a sport (or just for fun!), cycling is more accessible than ever. Keep your eyes peeled in the parks and on the roads for the next cycling superstars to come out of Manchester. 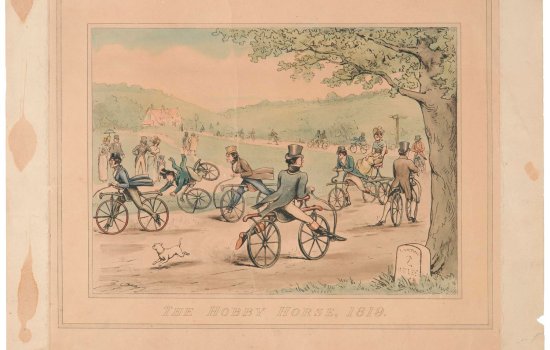 Manchester may not rank as highly as the likes of Copenhagen, Amsterdam, Beijing or Bogotá as a 'cycling city'. However, it has played a long and surprising role in the development and popularisation of cycling. 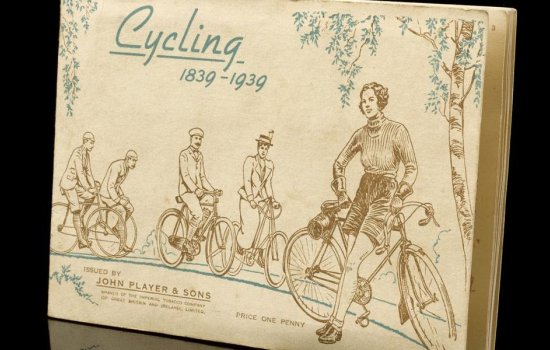 Ordinary, radical and sustainable: Bicycles in the SMG Collection 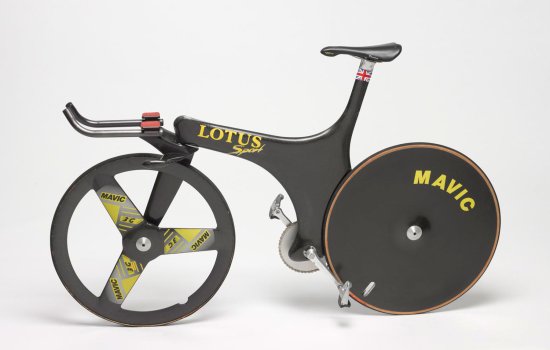