Industrialisation in 19th-century Manchester had world-changing effects, but it also polluted the city and caused massive health problems for its inhabitants. Can the environmental challenges and solutions of the first industrial city offer insight into the air pollution dilemmas confronting us as we face the current climate crisis?

Safe, clean air to breathe is essential for human health and wellbeing. Despite this, the World Health Organisation (WHO) currently estimates that around 7 million people die every year from diseases caused by exposure to fine particles in polluted air. According to the global BreatheLife campaign, over 80% of cities exceed World Health Organisation (WHO) guidelines for safe air.

Nearly everyone is impacted by air pollution, but especially those in low and middle-income countries, where 9 out of 10 deaths from air pollution occur. The most vulnerable communities are bearing the brunt of our impact on the environment.

Our health is inseparable from the health of the planet, and the climate crisis makes clear the urgent need to use cleaner, sustainable sources of energy. Campaigners have been trying to tackle the deadly problem of air pollution for nearly 200 years, but it remains a global problem.

The primary source of air-polluting emissions is the practice of burning fossil fuels as an energy source. It was in 19th-century Manchester that coal was established as the dominant source of energy for powering industry. Although people at the time didn’t understand the long-term climate consequences of burning fossil fuels, contemporary observers very quickly noticed the dreadful immediate effect of poor air quality on human health.

One receives one’s first intimation of [Manchester’s] existence from the lurid gloom of the atmosphere that overhangs it. There is a murky blot in one section of the sky, however clear the weather, which broadens and heightens as we approach. And now the innumerable chimneys come in view, tall and dim in the dun haze, each bearing atop its own pennon of darkness.

Hugh Miller, First Impressions of England and its People (1847)

Coughs, stinging eyes and perpetual gloom became synonymous with industrial Manchester. Visitors to the ‘shock city’ of the industrial revolution were appalled by the smoke, dirt and stench produced by Manchester’s distinctive forest of chimneys.

As the world’s first industrial city, Manchester has a long and difficult history of urban air pollution. At the peak of Manchester’s cotton industry, coal-powered steam engines drove the city’s towering cotton mills, filling the air with noxious, sooty coal smoke. Residents and workers suffered the consequences of living with industrial air pollution, including dismal, dark skies, dirty homes and clothes, and respiratory disease and increased mortality. This urban air pollution was known at the time as ‘the smoke nuisance.’

The first ever steam-powered cotton mill was built at Shudehill in Manchester in 1782 by Richard Arkwright. Following his example, mill-owners rushed to build engine-powered mills among Manchester’s growing urban sprawl, where there was a ready supply of workers and a thriving marketplace for textile products.

By the mid-1840s, there were about 500 smoking industrial chimneys on Manchester’s skyline, and the number was constantly increasing. Despite causing dreadful living conditions for Manchester’s residents and workers, coal smoke was associated with thriving industry. For Victorian industrialists, smoke became a signifier of economic success and technological progress. And it wasn’t just the wealthy industrialists who made this association—for factory workers, engineers, technicians and their families, smoking chimneys meant jobs.

At the heart of Manchester’s urban air pollution problem was the practice of burning coal, a fossil fuel. Steam engines made it possible to use heat energy from coal, readily available from Lancashire’s mines, to power the machinery in a factory or mill. It was a revolutionary idea, one that led coal to become the fuel of choice for industrial machinery.

The products of burning coal are carbon dioxide, ash and water vapour. Smoke and soot are produced when coal is burned, but the combustion is not complete.

Scientific analyses of the effects of coal smoke on humans have found that it is exposure to the small particles in smoke (smaller than 2.5 micrometres in diameter) which poses the greatest immediate risk to human health and leads to heart and respiratory diseases and increased mortality.

As early as 1820, observers in Ancoats, where engine-powered cotton mills were first introduced, were trying to encourage mill owners to reduce the quantity of smoke their mills produced by ensuring full combustion of the coal, a practice they called ‘smoke consuming’.

It is certainly a great improvement, for we have been much annoyed by Smoke, we could not do without engines, but the Smoke they raised has been a great nuisance…

Unattributed, Excerpt from the etching 'Smoke consuming at Ancoats, Manchester in 1820'

Manchester’s mill owners clamoured for more technologically advanced engines to power their business and increase their profits. Clever enhancements made it possible for engines to produce more power per ton of coal burned.

As engines got bigger and were installed in more mills, the number of coal-burning boilers increased too, and more and more smoking chimneys sprouted up across the city. By the end of the 19th century there were almost 2000 industrial chimneys polluting the air of Manchester and Salford.

Profits going up in smoke

Smoke abatement societies were first formed in the mid-19th century to reduce the air pollution created by Manchester’s industry. Anti-air pollution activists argued for technological solutions to ‘the smoke nuisance’ and sought tighter legislation to reduce Manchester’s thickening smoke cloud. In 1842, the Manchester Association for the Prevention of Smoke was founded.

Since smoke and soot are produced when the coal is not burned fully, anti-pollution activists focused on the idea that smoke signified a tragic loss of profits caused by inefficiency. Black, billowing smoke was a visual indicator that the potential energy in the coal was being wasted—profits were literally going up in smoke.

Every wreath of smoke that curls up a chimney is so much wasted fuel.

Campaigners tried to persuade the owners of engine-powered businesses to embrace technological solutions. Using more efficient steam boilers like the Lancashire boiler was one of the ways recommended to try to burn coal more efficiently and reduce the amount of black smoke produced.

Although legislation to limit smoke was often ineffectual, there were some efforts to monitor and curb the smoke produced by industry in Manchester. Engineer Ted Wadsworth started his career as a young boiler stoker in 1922. The boiler stoker was responsible for keeping the fire burning briskly to minimise the amount of black smoke produced. Ted explained in 1990 that sanitary inspectors would watch carefully for chimneys producing too much black smoke and the stoker could be reprimanded if they weren’t careful.

The adoption of gas-powered engines where possible would certainly have helped reduce coal smoke pollution in late 19th-century Manchester. However, gas was expensive compared to the cheap and plentiful coal available from the Lancashire coal field right on Manchester’s doorstep.

It continued to make economic sense for the big polluters to use coal-powered steam engines well into the 20th century. Anti-smoke campaigners pressed for cheaper gas prices in the hope that it would encourage more of Manchester’s manufacturers to adopt cleaner gas technology, but with very little success.

Dedicated campaigners fought to reduce Manchester’s smoke problem, from the formation of Manchester Association for the Prevention of Smoke in 1842 through to the turn of the 20th century. While coal was the primary fossil fuel used in industry, the ‘smoke nuisance’ continued relatively unabated, with neither technological solutions nor legislative control making a significant impact. The dire effects of industrial smoke were generally accepted as a necessary part of urban life, and a fair price to pay for economic success.

Manchester continued to have some of the most polluted air in the country until the 1956 Clean Air Act finally led to the creation of smokeless zones, and for the first time in over 100 years, the city’s residents were able to breathe cleaner air.

The long-term effects on the climate were not part of the initial conversation about industrial Manchester’s unpleasant and dangerous smoke problem. Efforts to limit coal smoke emissions were focused on air pollution and the localised consequences for human health and the physical environment.

However, as early as 1835, mathematician and inventor Charles Babbage observed that by burning coal, industrialists were releasing vast quantities of carbon dioxide into the atmosphere without an understanding of the long-term consequences.

The chemical changes which thus take place are constantly increasing the atmosphere by large quantities of carbonic acid [carbon dioxide] and other gases noxious to animal life. The means by which nature decomposes these elements, or reconverts them into a solid form, are not sufficiently known.

Charles Babbage, On the Economy of Machinery and Manufactures (1835)

Scientists started to theorise at the end of the 19th century that the carbon dioxide emitted when humans burn coal could create a greenhouse effect and increase global temperature. There is now a global scientific consensus that burning fossil fuels causes climate change.

Today most polluting industry has moved out of Manchester and often out of the UK altogether, to other fast-growing cities where labour is cheap and environmental protections often weak.

Nowadays, the main cause of harmful air pollution in Manchester is emissions from road traffic. There is great pressure to reduce the toxic pollutants in the air of our cities, with the government introducing more ‘Clean Air Zones’ encouraging us to drive less. One of the key ideas laid out in the Greater Manchester Clean Air Plan is for Manchester to become the first city region in the UK to have a fully joined up cycling and walking network; the most comprehensive in Britain, covering 1,800 miles.

As the first industrial city, Manchester was the first to experience the air pollution caused by increased industrial emissions, and as the birthplace of the Industrial Revolution, Britain holds responsibility for a large amount of historic carbon emissions. In July 2019, Manchester City Council was one of the first in the UK to declare a climate crisis with the intention of assuming a leadership role in taking concrete action to reduce carbon emissions. 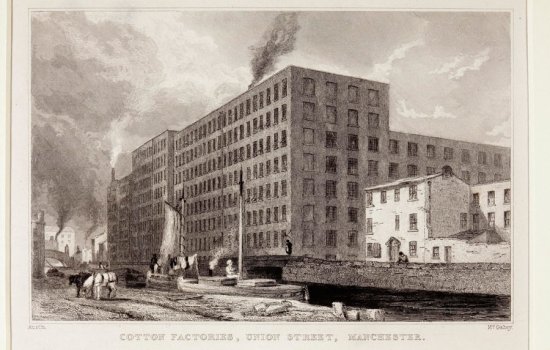 Slums and suburbs: water and sanitation in the first industrial city

Access to clean water and safe sanitation is a human right. Yet poor sanitation and contaminated water still endanger billions of lives, just as they did in rapidly expanding industrial Manchester.

Manchester was the original 'shock city' of the Industrial Revolution. The early 19th century saw a huge building boom and a population explosion that changed life in the city with breath-taking speed. 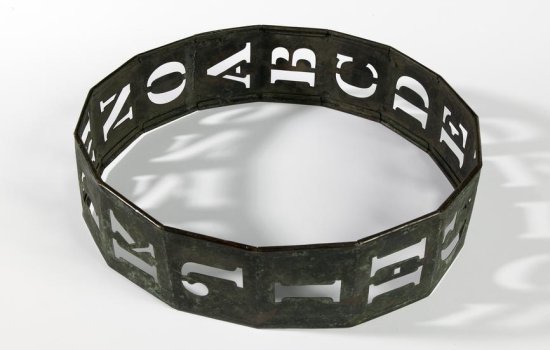 Explore our Textile Industry collection and discover why Manchester, dubbed 'Cottonopolis', was once the international centre of the cotton industry.