It’s been a long time coming but must-see exhibitions and experiences are back at museums and galleries across the city. Plan and book your visit now with our handy guide below. We have all missed you.

For even more information on upcoming cultural events, activities and resources, you can also visit the Visit Manchester website.

Explore the past, present and future of ideas worth fighting for, throughout the People’s History Museum’s two family-friendly galleries, exhibitions, archive and shop.

Visit the headline exhibition, More in Common: in memory of Jo Cox and explore Jo’s life and legacy. See the Jo Cox Memorial Wall, on public display for the first time since Jo’s murder in June 2016, alongside a specially commissioned virtual Wall of Hope to add your personal tribute message. Take the self-guided trail, specially developed for families, to discover Jo’s story and the issues it raises through younger eyes.

Find the first of a series of new exhibitions for 2021 exploring and celebrating migration and the diverse and multicultural history of Britain, and from Saturday 29 May 2021 see a British Museum Spotlight Loan, Crossings: community and refuge, featuring the Lampedusa cross, on its first tour around the UK.

Enjoy hands-on activities and digital interactives for all ages, connecting you and your family with PHM’s unique collections and stories, in this award winning, family-friendly museum.

Visit the suffragette kitchen to play the Pank-a-Squith board game, see how fast you can work at the Bryant & May match factory through an arcade style game, go back in time at the Co-op shop, and play your favourite songs on a vintage jukebox.

And be sure to visit Open Kitchen Cafe & Bar, to enjoy a sustainable, ethical and delicious new food experience.

Head to People's History Museum's website to plan and book your visit today. 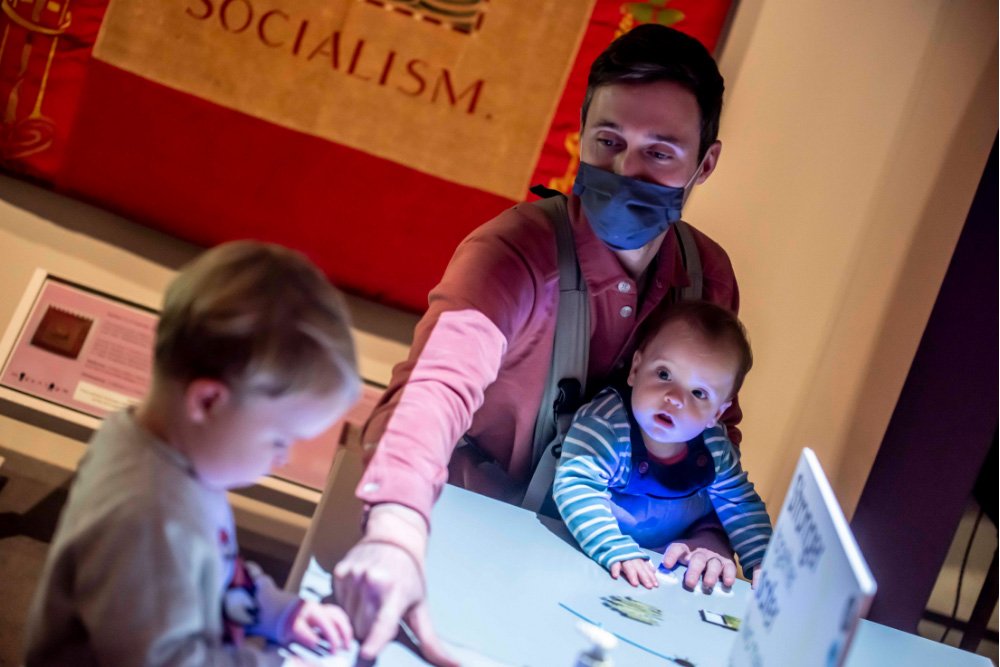 Obstructions, Castlefield Gallery’s locked-down exhibition, will open for just five days from 19–23 May.

Originally due to open on Saturday 21 November 2020, and only able to welcome visitors in the virtual realm since then, the exhibition was conceived during what now feels like the early days of the pandemic. 15 artists from the North West of England were invited to remake an existing piece of their work with one condition: they had to accept a bespoke ‘obstruction’ given to them by another artist in the exhibition. Inspired by a long history of artists using self-imposed restrictions to aid creative or free thinking, it also riffs off of the restrictions and disruptions caused by COVID-19.

Works include metal panels coated with ‘dead powder’ the leftover paint from the factory’s daily jobs excessively applied so that it slips and drips as it dries, industrial strip lights linked to real-time light sensors in the factory, and a video installation showing how pace and rhythm is set, changed and communicated. 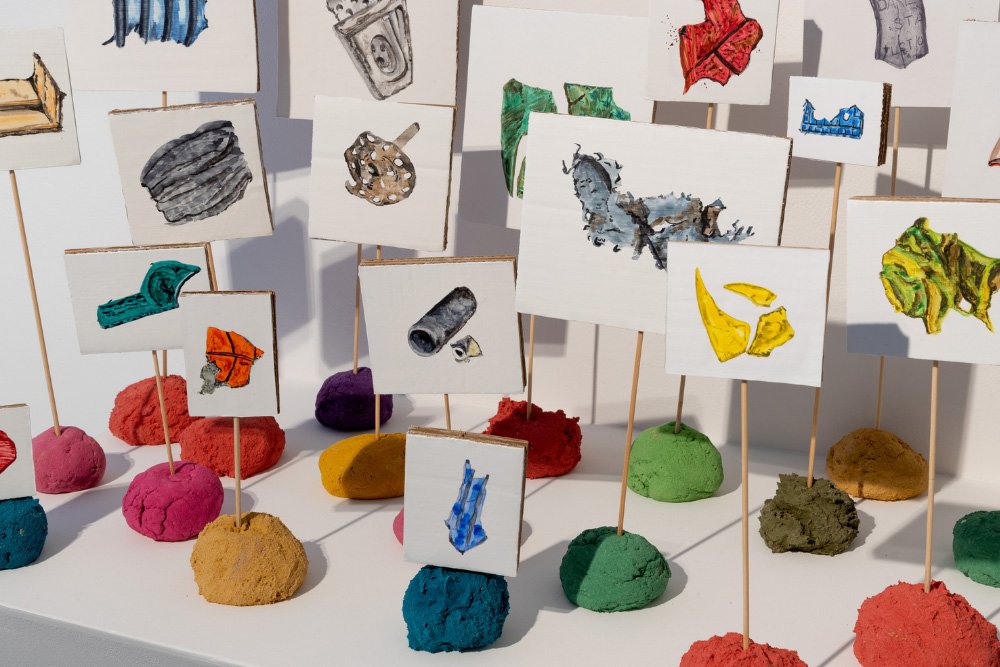 HOME reopens with a programme including two new exhibitions, a programme of film releases including three Best Picture Oscar nominees and a new film season exploring filmmaking on screen.

In HOME’s main gallery space, Soul Journey to Truth, presented in association with Koestler Arts, has been carefully curated by Lady Unchained (Brenda Birungi) and features over 130 artworks ranging from drawings and paintings to pieces of writing and music. All the works were entries to the 2020 Koestler Awards, an annual scheme run by Koestler Arts, the UK’s leading prison arts charity, to promote artistic achievement in the criminal justice system and secure sectors.

The exhibition uses quilt to look back at lesbian pasts and takes pleasure in the return to the images, iconographies and symbols that have been used to invoke lesbian strength, power and community throughout the 20th and 21st century: Sappho; the interlocking Venus; the labrys; and the Amazon woman. But it is also an act of mourning the disappearance of the lesbian archive, dyke lands, lesbian history walks and lesbian spaces.

In its opening weeks, HOME will be showing a number of nominees for the Best Picture Oscar—Minari, Sound of Metal and Judas and the Black Messiah amongst them—plus key films previously available to audiences for online viewing only.

From 7 to 30 June, The Reverse Gaze: Filmmaking on Screen will look at the act of creating images and more generally the process of artistic endeavour, offering along the way an analysis of the film industry and the personal struggles within it. 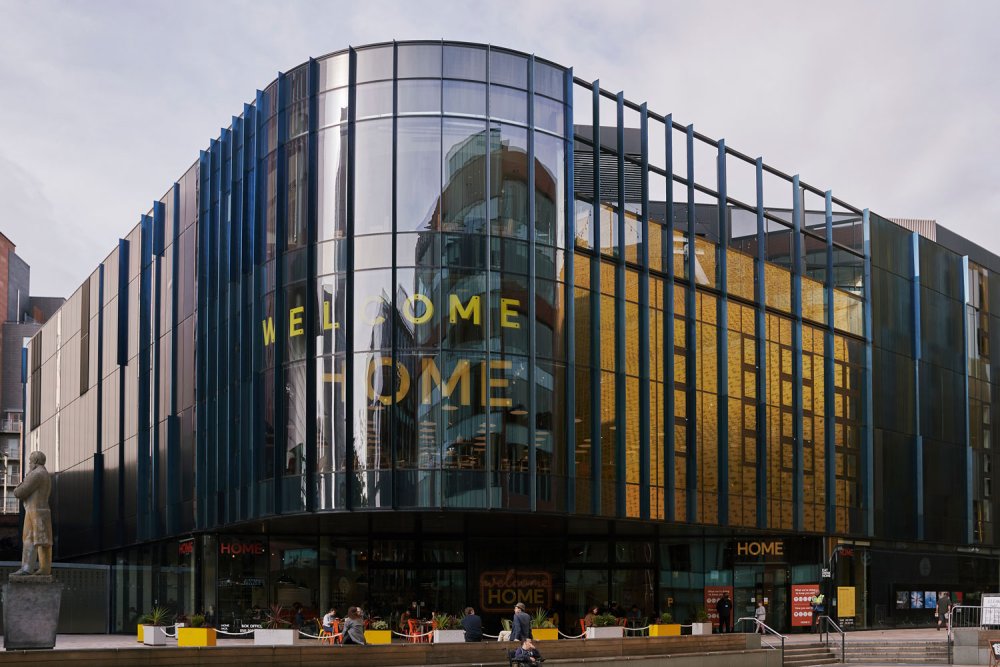 Explore collections that tell the stories of conflict, from the First World War to the present day in IWM North’s Main Exhibition Space. Discover the forgotten histories of service personnel and civilians, see conflict through the eyes of artists and immerse yourself in the Big Picture Show this summer. This is a place where every object on display, every contemporary work of art and every exhibition is designed to live long in the memory.

For a limited time only, the exhibition Aid Workers: Ethics Under Fire, has been extended which brings together powerful stories from humanitarians working in conflict zones. Now running until 24 September 2021, understand the global story from interviews of individual experiences in the field, displayed alongside photographs and unique objects, recorded and sourced specially for this exhibition.

On your visit you’ll encounter a Médecins Sans Frontières Land Cruiser, an iconic vehicle associated with aid work, and the IKEA Better Shelter, an innovative shelter designed for refugees. See aid workers’ personal belongings and equipment, which give an insight into the conditions they face, and the mental and physical trials of working in the field. 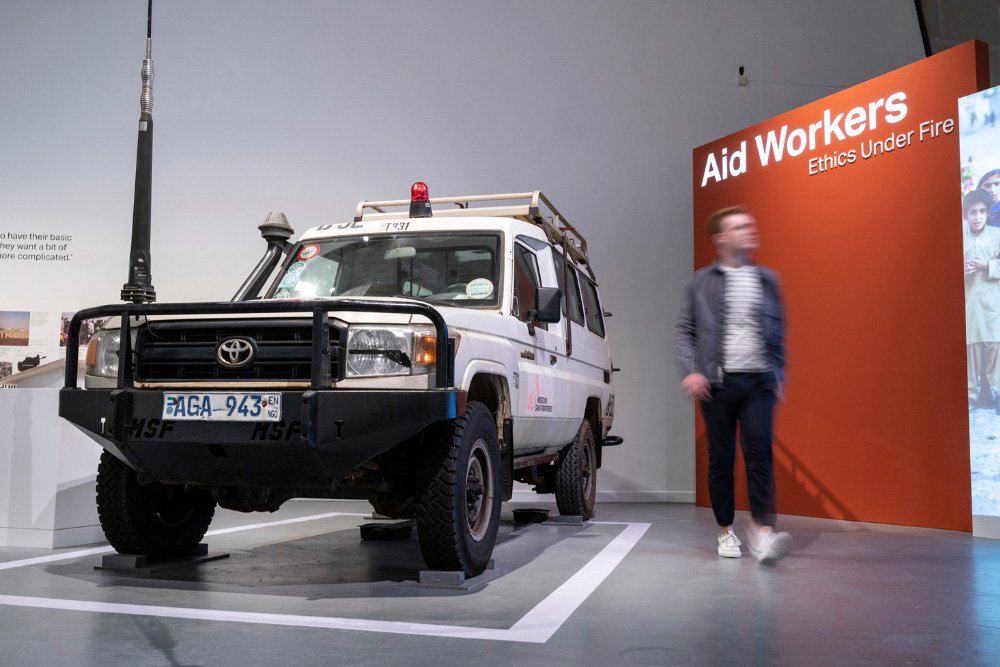 The first performance of The Lowry’s reopening line-up is a critically acclaimed live production of C-O-N-T-A-C-T by Aria Entertainment and WEF Productions, which will take place outdoors from Tuesday 18 May.

From Saturday 22 May, the art centre’s galleries will re-open at weekends on a timed-entry, socially distanced operation, offering visitors both the permanent LS Lowry collection and the exhibition exploring people from Salford’s experiences of lockdown, Days Like These.

On Sunday 30 May, comedian Michael Spicer will be the first artist to perform indoors on the main Lyric Theatre stage, with his The Room Next Door tour to a socially distanced audience. Northern Ballet follows in the Lyric Theatre with a five-day run of Dangerous Liaisons from 1–5 June.

For all tickets and pre-booked timed entry of The Lowry Galleries, visit The Lowry's website.

If you’re visiting the main gallery, you won’t need to book a ticket—you can just walk in. There will be lots to see including a new display, What is Manchester Art Gallery?, which introduces the gallery, its origins, how the collection was formed and how it relates to Manchester and its people.

Don’t miss Grayson's Art Club, which displays works that were selected by artist Grayson Perry during Grayson’s Art Club, the popular Channel 4 TV series. All the works on display are very personal visual representations of lockdown, made by the public, well-known artists and celebrities for Grayson’s Art Club.

Tickets are required for Grayson’s Art Club (19 May to 20 June). Further ticket information can be found on the gallery website.

The shop and cafe will be open with an updated seasonal menu, lots of new outdoor seating and of course, plenty of cakes.

If you're not ready to visit yet, the gallery is continuing to offer its events programme online via Zoom. Events are free but need to be pre-booked. 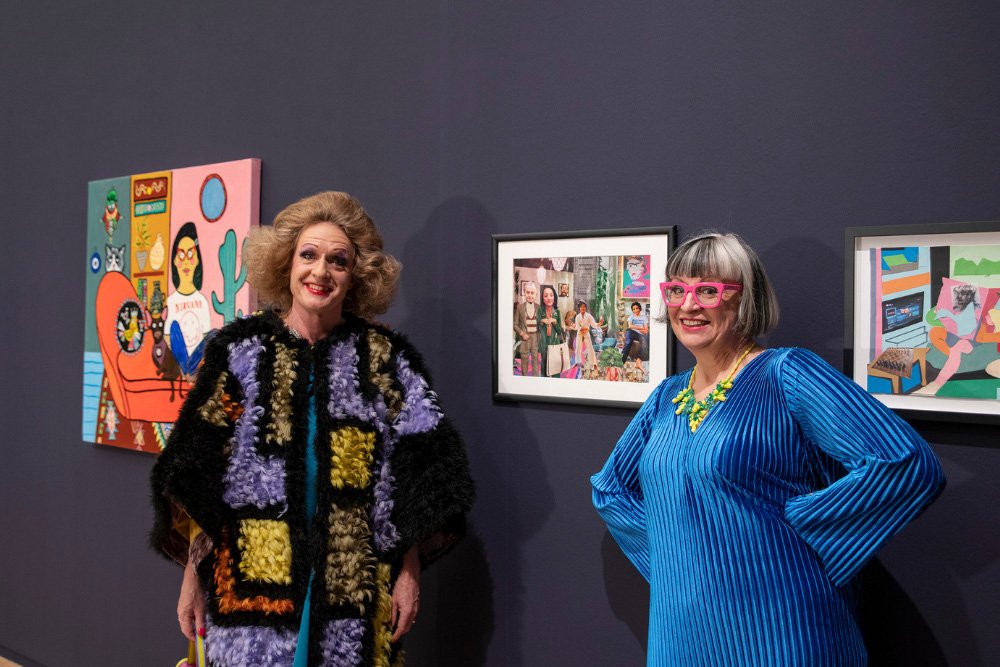 Manchester Jewish Museum is thrilled to be reopening its doors following a major capital development redesign and extension. Two years in the making, the brand new museum now features a gallery, café, shop and learning studio and kitchen, as well as the stunning restoration of its 1874 Spanish and Portuguese synagogue.

Located in Cheetham Hill, one of the city’s most culturally diverse areas, Manchester Jewish Museum explores and shares Jewish stories of migration, communities and identities to make universal connections and to bring people together. As well as a brand new exhibition space and restored synagogue, the museum will also launch a season of events and activities from the summer.

The museum will be reopening this summer with a unique installation by Turner Prize-winning artist Laure Prouvost as part of Manchester International Festival 2021.

The museum looks forward to welcoming you and tickets for general admission will go on sale from 20 May.

Visit the Manchester Jewish Museum website for more information on planning your visit. 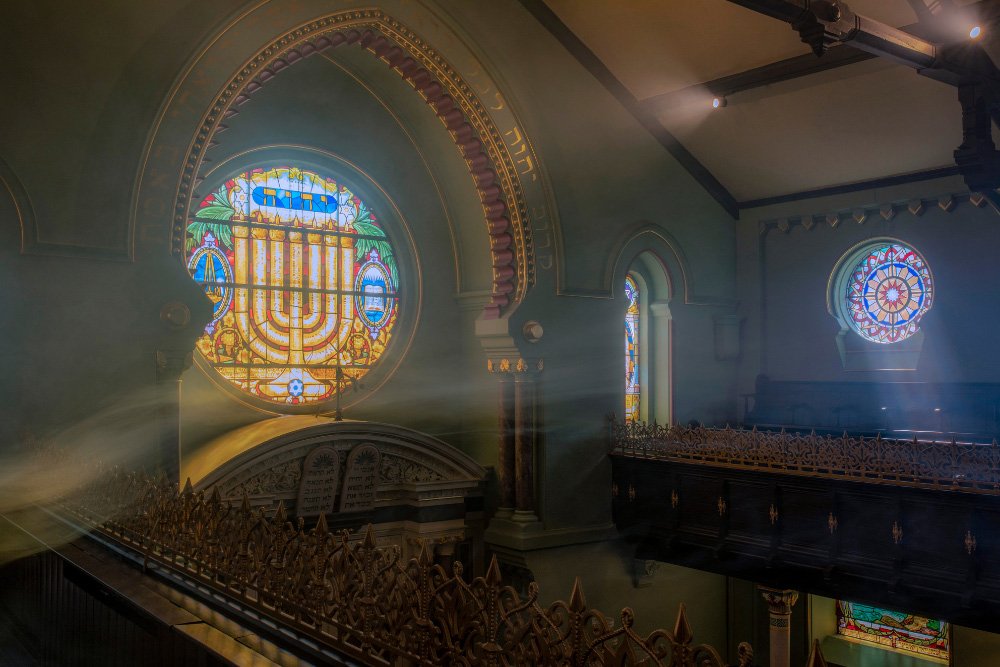 Explore 3 floors of displays and exhibitions, including objects from all over the world at Manchester Museum. There are so many fascinating things to discover—from Stan the T.rex to the Vivarium, and newly bred Harlequin frogs.

Visit the new soundscape exhibition Wild Chorus, recorded and composed in summer 2020 by sound artist Harry Ovington. The artwork reflects a unique moment of global quiet and acts as a time capsule of the first lockdown, blending field recordings of nature with sonified weather pattern datasets. Discover the holographic artwork Voicing Silence by Liverpool-based artist Laurence Payot. This video installation exploring the emotional impact of biodiversity loss is part of the collaborative Thinking Through Extinction project.

Check in with the Insect Hotel, an installation by artist in residence Kate Eggleston-Wirtz, and discover the important role that insects play within our world. The Insect Hotel is on display in the museum shop, where you will also find a fantastic range of unique gifts and books inspired by the museum’s collection—with many fair trade and sustainable gifts, there is something for all ages, tastes and budgets with every purchase supporting the museum.

Manchester Museum’s much-loved Café Muse will be open with a range of hot and cold drinks, cakes and snacks to take away.

The museum’s digital offer continues on mmfromhome.com with a whole range of events and resources.

Plan and book your visit today on Manchester Museum's website. 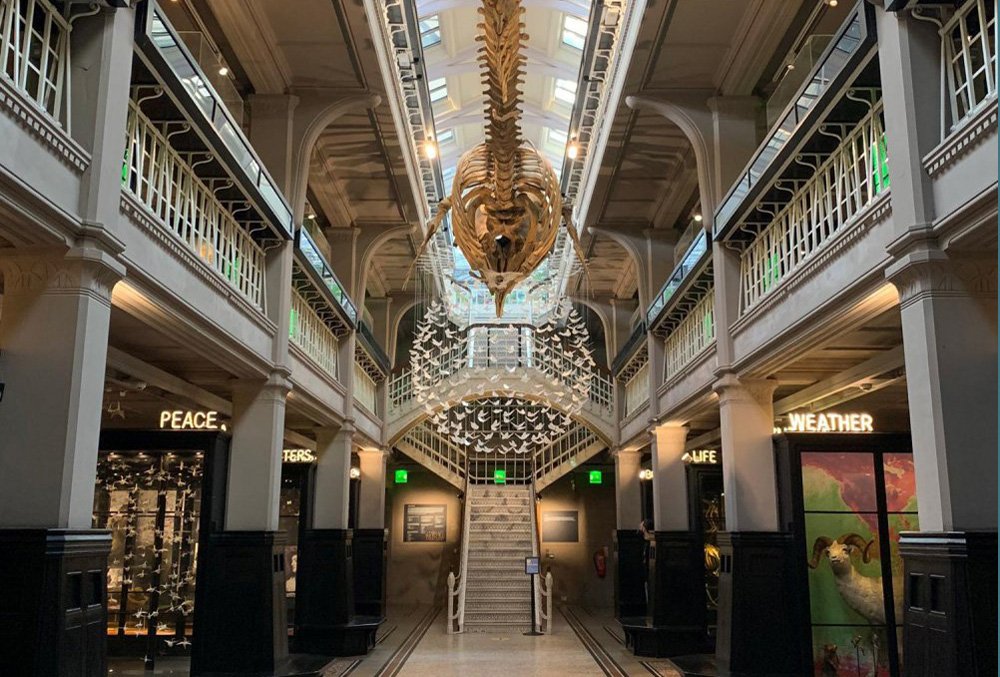 Highlights of a visit to the National Football Museum include two new exhibitions, a new object and a new gallery to explore.

Visit The Laws of the Game, a new object on display from 27 May 2021. Without this book, the world would be without its most popular sport. The 1863 Minute Book features the 13 original Laws of association football, which were written by Ebenezer Morley, the first secretary of The Football Association.

Opening on 11 June, The Euros, a new photographic exhibition, coincides with the rescheduled UEFA Euro 2020 which is being held across the continent for the first time in the competition's 60-year history. This exhibition will focus on Euro 96, which took place in England. The exhibition will look at popular culture of the period when the Three Lions song reverberated around stadiums as football came home.

A new gallery celebrating Lily Parr—England’s first international women’s footballer—will be open from the summer. The gallery will feature new objects and previously unseen photographs of Lily and her teammates. Born in St Helens in 1905, Parr was one of the most astonishing and important figures in English football. It’s believed she scored more than 980 goals in a 32-year career.

Visitors can book museum tickets in advance on the National Football Museum's website. 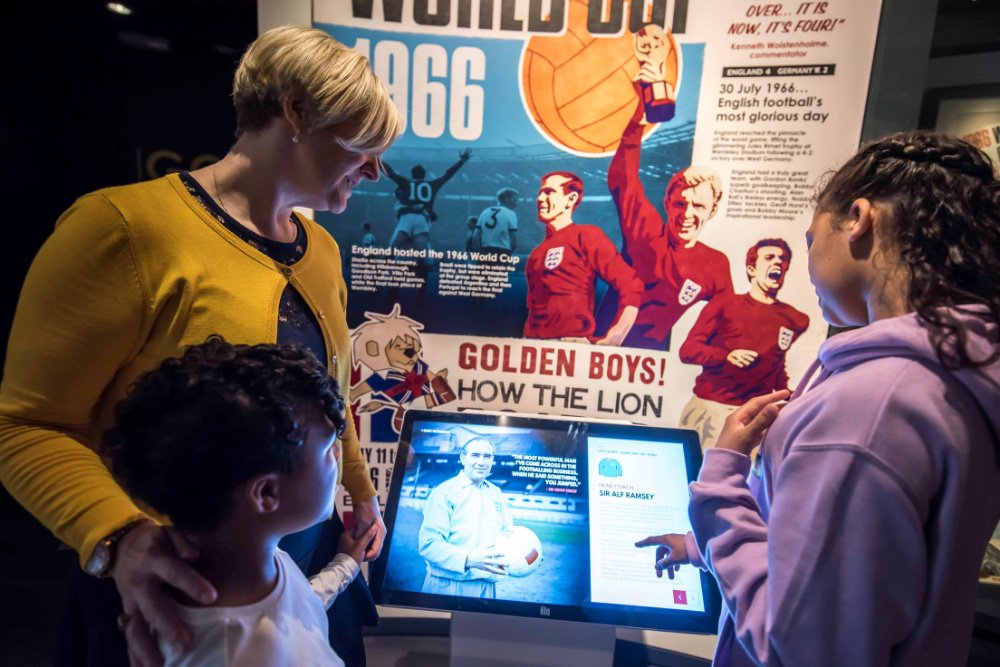 From 19 May – 1 July, The Whitworth is open for film screenings of its new exhibition, Imran Perretta: the destructors.

The Whitworth Café, Art Garden and Collections Care Centre are also open from 19 May to 1 July. The rest of the gallery remains closed while the next exhibitions are installed, following COVID-19 safety guidelines.

The Whitworth looks forward to welcoming you back again when the gallery reopens fully on 2 July with new exhibitions, and extended opening times, as part of Manchester International Festival 2021.

Please use the Parkside entrance to enter the gallery and café.

Visit CLOUD STUDIES | Forensic Architecture, part of MIF21 from 2–18 July. From Palestine to Beirut, London to Indonesia and the US-Mexico border, Forensic Architecture investigate, explore and expose how power reshapes the very air we breathe in this urgent and compelling exhibition.

Book your free ticket here and plan your visit on The Whitworth website. 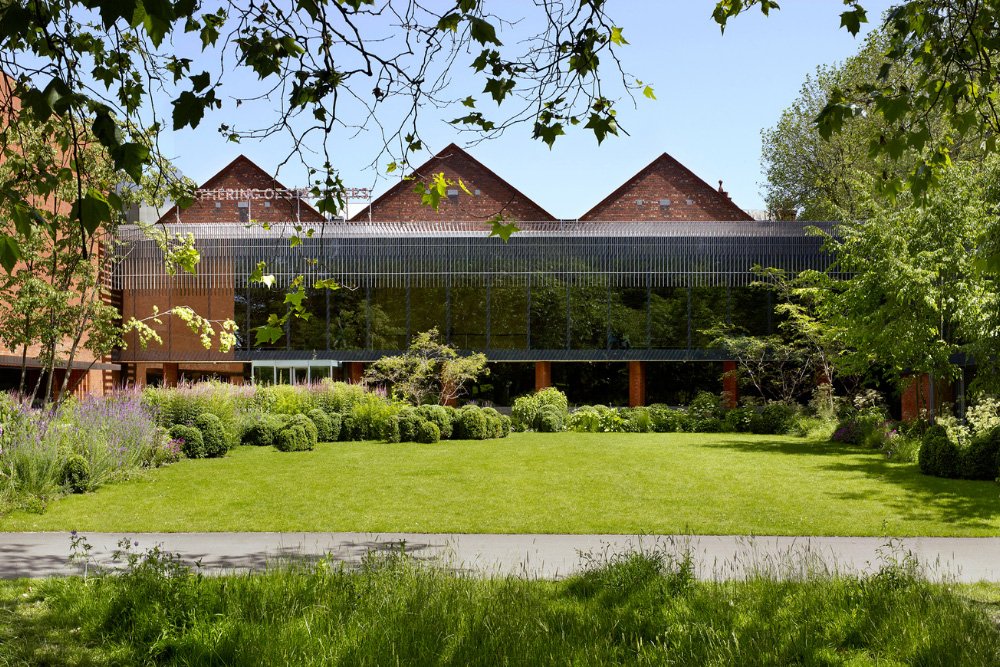