This gallery is temporarily closed

By road or by air, this city’s inventors and engineers made a big impact on the way we travel today. See the cars, bikes and aeroplanes that got industrial Manchester moving.

The former Lower Campfield Market, which opened in 1882 to house an open-air market, is now home to some of the gems from our transport collection.

See a replica of the Roe Triplane 1, which became the first all-British aeroplane to take to the skies on 23 July 1909.

It was the work of Manchester-born inventor Alliot Verdon Roe, who founded A V Roe and Company (known as Avro) in 1910. A V Roe became a leader in British aircraft design, building aeroplanes that saw action in both World Wars.

Get up close to the Avro Avian IIIA (G-EBZM), and the WR960 MR2/AEW2 Avro Shackleton, which was designed to locate and attack submarines and conduct search and rescue operations, thanks to its ability to fly for up to 24 hours.

Did you know that the Rolls-Royce motor company started life in Manchester after a chance meeting between Charles Rolls and Henry Royce at the city’s Midland Hotel? The 1905 Rolls-Royce model on display was used by Henry Royce himself.

Could you steer an aeroplane safely through the skies on a foggy night? Learn how Manchester-made radar scanners use radio-wave reflections to help pilots find their way in the dark and detect enemy aircraft.

Inside the Air and Space Hall

Have you ever wanted to fly your own jet? Then take the controls on Fly 360, our hands-on flight simulator. 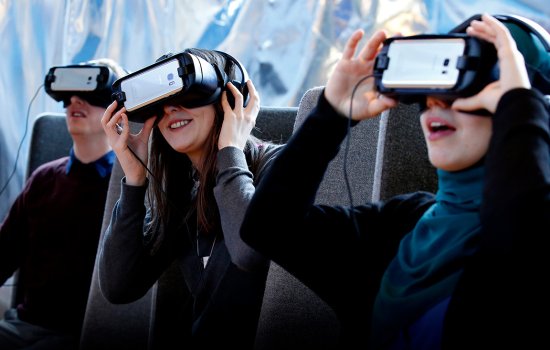 This is a small selection of objects on display in the Air and Space Hall. You can browse our online collection for more items housed in the gallery. If you are visiting to see any of these objects, please contact us in advance to make sure that it will be on display.